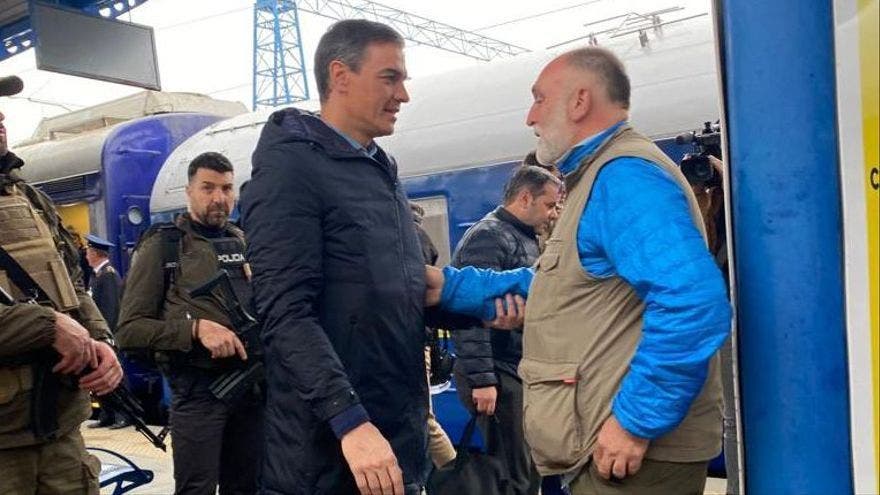 SPAIN’S Prime Minister, Pedro Sanchez, met with chef Jose Andres in Kyiv on Thursday during his visit to Ukraine.

The World Food Kitchen charity set up by Andres is providing meals to thousands of Ukrainians.

The Asturias-born chef met Sanchez at a railway station and were surrounded by extensive security including Policia Nacional officers from Spain.

Andres has set up kitchens in border areas, but also in cities hit by bombs and famine.

Four volunteers were injured at the weekend after a Russian missile hit the charity kitchens in Kharkiv.

Jose Andres said: “The support of Pedro Sanchez and of Spain as a whole for the people of Ukraine and President Zelensky in their fight for freedom and democracy is extremely important.”

“All democracies must support Ukraine,” he added.

At a joint news conference with Zelensky, Sanchez announced that 200 tonnes of ammunition and 20 armoured trucks is being sent by the Spanish naval ship, ‘Ysabel’ to bolster Ukraine.

Sanchez also toured the town of Borodyanka where he said he was ‘shocked to witness the horror and atrocities of Putin’s war on the streets’.

Just hours earlier, nine tortured bodies were found by police in the town.