If you go down to the woods today you might just be in for a big surprise – especially if you have a dog. There lurks, in pine forests around the region, a very nasty creature that has such an effective means of self defence it is more akin to chemical warfare. The little beast to which I allude is the dreaded processional caterpillar (Thaumetopoea Pityocampa) – a pest so rampant and hazardous that the environmental branch of the Guardia Civil (Servicio de Protección de la Naturaleza) can be called out if you have them on your land and you want to get rid of them.

“Bastards!” says Dave Shaw, an estate agent who recently took his four dogs for a walk above Carataunas. “The dogs were running around and picking up sticks and generally behaving like dogs will in a forest. But on the way home in the car three of them began to vomit and one, a puppy, was seriously sick for fourteen hours” Dave took the animals to the vet, who quickly realised what had happened. The dogs had come into contact with a column of processional caterpillars. In the worst case one dog, Chester, had taken one into the mouth; as a result the dog lost two pieces of tongue and is lucky to still be alive. “The vet said that in some cases the tongue has to be amputated or it will wither and die.” 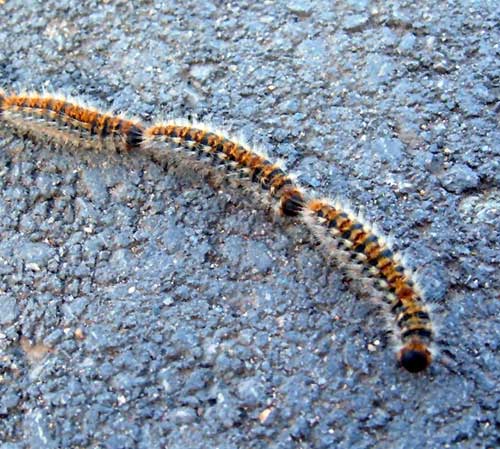 So what exactly is a processional caterpillar? The species is common throughout the Mediterranean and lives in pine trees at any altitude. You may have seen their silky cocoon-like nests in the branches and wondered what they were. Inside each nest there can be hundreds of baby caterpillars which, during the spring months, hatch out and fall to the ground. They roam around in long columns, ‘nose to tail’, hence the name, and move from tree to tree, stripping it of its foliage.

“Don’t go near them!” warned Steve Lee who runs a health food shop in Órgiva and had a recent brush with the processional caterpillar. Steve noticed several nests in his garden and, concerned for his animals, attempted to eliminate them. Already aware of the dangerous poisonous spikes on the caterpillars’ bodies, Steve was taking no chances when it came to getting rid of them. Using sticks he manoeuvred the caterpillars into a bucket and then emptied them onto a roaring bonfire and stood back. So far so safe, you might think. Not so.

“What happened next,” Steve related “was the fire sent a cloud of poisonous fine spines into the air, mixed in with the smoke. These then rained down on me and caused a terrible skin reaction.” Several weeks later Steve is still showing signs of the “incredibly itchy” rash that developed on exposed parts of his skin. “They’re ‘orrible.” Added his wife, Audrey.

Just how dangerous can these caterpillars be? Dave Shaw told me that this years’ outbreak is the worst in years and that three dogs have reportedly died in Cadiar alone in recent weeks. “Even worse,” he says “I heard reports that a young girl in Mallorca had come into contact with them and suffered a violent anaphylactic shock reaction from which she died. People have got to know about the dangers of walking in pine forests around here in the spring.”

I wonder how one might safely get rid of them. One supposedly recommended method is to spray the caterpillars nest with hairspray, wrap it in a plastic bag and torch it. I wouldn’t recommend this method though as it would seem to pose a high risk of starting a forest fire. By no means hit the caterpillars with a stick or stamp on them because this will just send their spines into the air in a kind of toxic dust cloud that can be inhaled. No, the best advice I have come across for dealing with them is to simply steer clear of them. They are active and dangerous between the months of February and May, and colonise pine forests or individual pine trees. After this time they turn into moths and are harmless. If you simply have to walk in the woods around this time the official advice is to carry some antihistamine tablets with you. 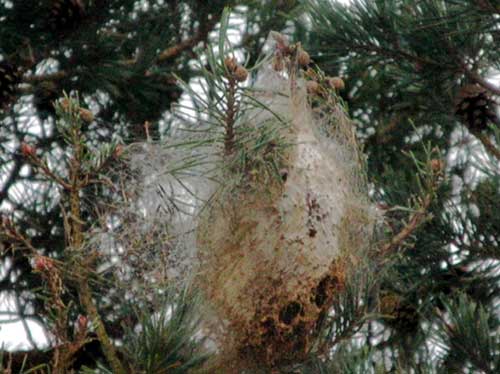 A popular method of control is to destroy the nests during winter (i.e. before January) by blasting them out of high branches with guns. Again, I wouldn’t advise this unless you really detest your neighbours who are downwind of you.

It’s heart warming to know that someone out there cares.