Pulled up for a huge golf macroproject, they line up in eerie rows like war graves in the Somme.

Many centuries old, they have been sacrificed for Europe’s insatiable desire for golf and holiday homes.

Part of the unrelenting costafication of Andalucia, they sound the death knell for nature conservation in southern Spain.

“This is a cynical and botched attempt to create ambience around the golf course and create space,” said tree surgeon Kit Hogg. “I am sure very few of these protected trees will survive. It is disgusting.”

Despite ongoing efforts to stop the work, EU investigations and – crucially – no guarantee of water, work at Los Merinos, near Ronda continues unchecked.

This is the true price of golf. 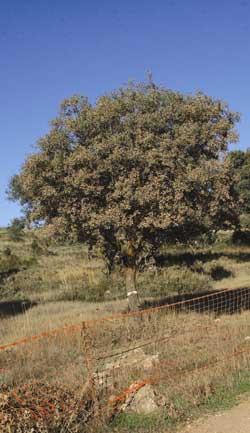 Only good for firewood

IT IS meant to be part of a Unesco world Biosphere reserve.

Yet inside Los Merinos, developers work around the clock to carve out the framework for a double golf course macroproject, with 800 homes, three luxury hotels and countless other installations.

Landscaping the gridwork of roads and laying down pipes, developers have already been fined for cutting down hundreds of protected “centenario” oak trees.

Yet, our exclusive photos suggest that in the last few months around 1000 more have been pulled up.

While developers claim that the trees have been carefully transplanted, half a dozen biologists and environment protection officers told the Olive Press that most will not survive.

“This is completely the wrong way to go about transplanting trees,” said Juan Oñate García, a biology professor in Ronda.

“Uprooting these trees in summer and transferring them without sufficient water, I doubt any will survive.”

It is also apparent that at least one ancient tree has been knocked down without due care (see picture top). And in the far distance, in an area difficult to reach (see pictures opposite), hundreds more oaks, apparently replanted earlier this year, have also failed to regenerate.

To make matters worse, all over the 1000 hectare estate, which sits alongside the Sierra de las Nieves national park, hundreds more trees look destined for the chop.

Ringed with red and white plastic warning tape, they await their moment of doom.

“It is a disgrace what they are doing here,” said British biologist Peter Jones. “They are clearly not taking due care of nature. You cannot transplant old oak trees of this age in this way. You can guarantee they have killed them.

“It has to be asked who is advising these people?”

Fellow Briton Kit Hogg, who has been a tree surgeon for 25 years, said: “Looking at these pictures these so-called protected trees are probably only good for firewood. Only a very low percentage will survive.

“Big trees may look rock solid, but they are very fragile organisms. They are built to grow in one place. Transplating them is a very dodgy operation.

“The main problem is the time of year, as transplanting should normally be in the winter. Unless they have been watered for an hour every day for at least a month they will not survive”

One environmental protection officer from the Junta de Andalucia, who knows the development well and has seen the pictures, was also horrified.

He said: “Some of these trees are between 300 and 400 years old and the percentage that will survive is very low. Transplanting is not a quick job and the speed with which the work is going on at Los Merinos will leave most dead.”

Neither the developer, nor Ronda town hall had commented as we went to press.