AS a Mercedes-Benz E-Class sedan glides through a security check and uniformed staff straighten deck chairs by an outdoor pool, well-heeled serenity masks the upheaval taking place at Madrid’s most exclusive golf club.

Golfers at La Moraleja, like those at courses across the whole of Spain, are rushing to sell memberships, which have cut their value by 32 per cent since 2006, according to Pilar Sanchez, an administrator at the club. 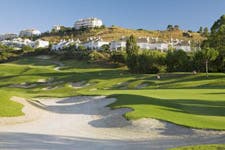 “It is the first thing they get rid of,” Sanchez says. “Next it is the beach house.”

Wealthy Spaniards are abandoning luxuries as a decade-long economic boom based on the homebuilding industry comes to an abrupt halt. The construction slowdown will probably lead the economy to the brink of a recession by the year’s end, Finance Minister Pedro Solbes said recently in Madrid.

At least 65 privately held developers and real-estate brokers based in Spain have filed for bankruptcy this year, according to Credito y Caucion, a Spanish credit insurer.

The richest 10 per cent of Spanish families, with an average net worth of more than 700,000 euros, have two-thirds of their fortunes tied up in real estate, according to a Bank of Spain survey published last year.

With property values on the slide and banks curbing lending, dumping golf memberships is one way to raise cash quickly.

“It is a sign of the times,” says Susana Garcia-Cervero, an economist at Deutsche Bank AG in London. “Many potential clients were in the real-estate market. They made a lot of money and now some are going to go under.”

Maria Dubois is asking 75,000 euros for the share she and her husband have at a club in Sancti Petri, near Cadiz in southwest Spain.

The couple will put the proceeds toward a new apartment and rent membership at the club for about 200 euros a month instead.

With interest rates in Spain little less than 6 per cent, paying off a loan for a 75,000-euro membership is almost twice as expensive as renting access to the same club.

“I am not short of money, but it is a bit more difficult to get a mortgage loan,” says Dubois, a 37-year-old travel writer. “This will help to pay for it.’’

Wealthy Spaniards bought golf shares as an investment in the past decade when they had credit on tap, says Javier Olmos, a co-owner of Madrid-based company 18golfclub, which brokers membership sales. That created a price bubble similar to the one in the housing market, where prices surged even when renting was cheaper.

With inflation at a 13-year high, wealthy Spanish are looking at other luxuries

Members also pay monthly greens fees of as much as 300 euros, Olmos says.

With inflation at a 13-year high eating into spending power and oil prices near a record, wealthy Spaniards are reconsidering other luxuries too.

Sales of Audi’s Q7 sport utility vehicle, a 100,000-euro favorite in downtown Madrid, slumped by two-thirds in June from a year earlier, according to the Spanish Car and Truckmakers Association.

“People are going to have to cut their consumption,” says Josep Prats, who heads a team managing about 11 billion euros at Ahorro Corporacion in Madrid. “They have been living beyond their means.”

Business at Spain’s hotels and restaurants contracted for the first time in more than three years in April, declining 3.7 per cent on the year, according to the National Statistics Institute.

That slump means other exclusive hangouts are suffering.

At the Puerta 57 restaurant in Real Madrid’s Bernabeu Stadium, the dining room is two-thirds empty on a recent afternoon. Fewer executives are tucking into the 100-euro lunch menu that attracts expense-account diners.

“There is the crisis for you,” says José Carlos Diez, chief economist at Intermoney SA, Spain’s largest bond dealer, as he surveys the room. “A year ago we would have struggled for a table here. Now look.”

Spain’s golf industry has surged in line with the housing boom. Investors bankrolled more than 100 new courses in the past 10 years, turning the sport into a two-billion-euro annual business.

Club memberships are typically traded privately, with buyers and sellers contacting each other through the club or a specialist broker.

Prices for memberships traded on 18golfclub have declined 30 per cent in the past year, according to Olmos.

The club’s 6,000 shareholders may find themselves teeing off behind former US Masters Champion Severiano Ballesteros.

“The price is always tied to the economy,” says Sanchez, who has worked at La Moraleja for 33 years and saw similar slumps in 1976 and 1990.

“Golf is a luxury, not a necessity.”

This article first appeared on bloomberg.com