THE food revolution that has made Spain famous around the world has finally come south. With three of the country’s restaurants in the world’s top ten, according to Restaurant magazine – more even than France! – it was perhaps inevitable that Andalucía would finally catch up.

I can certainly vouch for its truth having just undertaken two years locating Andalucia’s best restaurants for a new book Dining Secrets of Andalucia. 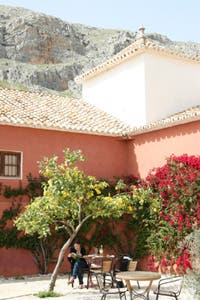 Not just geographically close to the cocina creativa heartland of the Basque region and Catalonia, Andalucía is where many of Spain’s best ingredients come from.

The Moors described the region as a ‘paradise’ in the 8th century and their legacy lives on today in the water courses (acequias) they dug and the terraces they carved out to best utilise water.

There is little doubt that as long as it keeps raining – and that is touch and go after four years of drought – you can grow and rear almost anything here. From avocados to artichokes and custard apples to oranges, the quality of ingredients is second to none.

There is somewhere good to eat in almost every town, the problem is finding it

Arguably the best ham in the world, the celebrated jamón Iberico, comes from Aracena in Andalucía and some of Spain’s best cheeses also come from the region, notably the goat’s cheeses of Ronda, which are served up in some of Madrid’s finest restaurants. Then there is, of course, the wine, with the sherries from the Jerez region and the delightful sweet moscatels and pedro ximenez from Málaga not to mention superb tintos from Ronda and Granada. 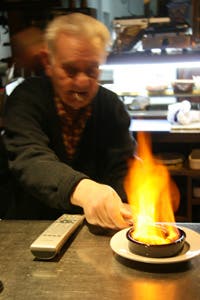 a journalist covering the region for the UK’s national newspapers and, more recently, The Olive Press, I have been astonished by the changes that have taken place over the last five years. While I used to struggle to find a dozen good restaurants in the whole region, there is now somewhere good to eat in almost every town. Even some of the most remote villages, places largely untouched by tourism such as Algarinejo, in Granada, and Galaroza, in Huelva, now have top class eateries. The change has been so fast that the mainstream guides like Michelin or Gourmetour have quite simply struggled to keep up. And with difficult remits and not enough inspectors, they are finding it hard to winkle out the new gems.

Against this background I approached Santana Books with the idea of a guide which would involve a two-year trawl of the locally recommended restaurants that shouted out for a visit.

Trying to get an even spread across the whole region proved hard but wherever I headed, be it to Aracena, Jaén or even the remote Cabo de Gata region of Almería, I was constantly surprised at wonderful new places opening up; and most encouraging of all was that the region is evolving its own distinct style of cooking. 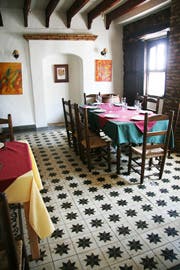 Not content to simply copy styles from the north, most of the region’s chefs have remained defiantly andaluz, using local ingredients and adapting and building on classic local dishes such as ajo blanco, porra and rabo de toro. Indeed, in some of the best restaurants practically every dish was from Andalucía. As chef Richard Alcayde at Med in Torremolinos explained: “Things are changing so fast in Andalucía. Of course we have all learnt a lot from Ferran Adria and Arzak in Bilbao but now we are developing our very own style.

“Confidence is high and in Andalucía we have everything we need to have the best restaurants in the world.”

While going mostly on the quality of food, I was, however, also looking out for those places that had a certain je ne sais quoi. Whether this was for their ambience, great alfresco dining or brilliant wines, I gave them a go. The choice in the book is not just about fine food and haute cuisine and, as a result, a number of cheap local ventas also make it.

But all is not well in paradise

But sadly all is not well in Andalucía. The ‘paradise’ that remained intact until the 1970s has come remarkably close to being ruined – if not by endless tower blocks and water-thirsty golf courses, then by the creeping spread of plasticulture to provide northern Europe with early spring vegetables. Bleeding the soil of its nutrients, not to mention creating an awful eyesore, the trend to grow in huge plastic greenhouses has already covered most of the Almería coastline and is making huge inroads into Granada and Málaga.

Golf courses are depriving this once fecund land of its lifeblood – there are already some 150 in Andalucía, the highest concentration in Europe, with a similar number planned.

Yet all is not lost. Slowly Andalucians are beginning to understand how fragile their ecosystem is. New laws have been introduced to protect the countryside and many golf projects are currently frozen while the downturn in the economy has helped to contain the army of developers. Many restaurateurs understand the urgency to protect what is left as they rely on getting the fine ingredients that are the make or break of their success.

The lettuces were under the grill, the veg in the freezer

When one American chef took over a restaurant in Cádiz province a few years ago, he was shocked to discover that the lettuces were kept under the grill while the vegetables were stored in the freezer! No longer can good restaurants expect to get away with that. In Ronda, for example, there are around half a dozen highly rated restaurants competing with each other. And each would sink without trace if its ingredients stopped being anything but tip top fresh. 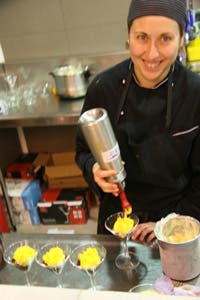 In Andalucía chefs are having to battle to get the ingredients the customer now demands. As one chef in Granada explained, people now expect to have at least one good paté or foie gras on the menu, which has unheard of five years ago.

Another restaurateur makes a two-hour journey to Cádiz practically every day to personally select his fish while others have their own vegetable gardens. At El Faro in El Puerto de Santa Maria, chef Fernando Córdoba is so enthusiastic about his prize artichokes that he insisted on taking me on a tour of his wonderful vegetable garden which, at various times of the year, provides up to half his ingredients. Nearby at Aponiente, easily Spain’s best fish restaurant, genius Angel Leon discovered that the only way to land the unfashionable non-endangered fish he wanted, having stopped buying tuna and cod, was to lease his own fishing-boat.

Also exciting is the huge growth of the organic sector. There are now thousands of organic producers across the region who understand the importance of pesticide-free fruit and vegetables. But, regrettably, more than 80 per cent of this produce is currently exported. The Olive Press is soon to begin an in-depth “Green Guide” to list these producers in the hope that this will help to keep some of the best organic produce here in Andalucía.

Cookery school La Consula is the lifeblood of Andalucian cuisine

Finally I would also like to mention that a cookery school makes up one of the entries in this book. Installed in an Italianate villa, where Ernest Hemingway and David Niven once stayed, La Consula is today a true dining secret. But its importance lies not just in the quality of its food but also in the attention to detail and professionalism that characterises every element of its operation, from the chefs to the waiters to the receptionist. As Dani García, Andalucía’s most famous chef told me: “It all begins at La Consula. It is the lifeblood of Andalucian cuisine.”

This remark speaks volumes for the bright future for Andalucian cuisine and the restaurants in which it is served.

Dining Secrets of Andalucia is available at all good bookshops or at www.santanabooks.com – Price: €14.90