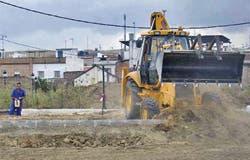 DESCENDENTS of those killed by supporters of the military uprising that led to civil war in Spain have reacted angrily to plans to build a housing development on top of a mass grave.

The town council of La Palma del Condado has passed the 119-home project, which is being built on the site of the Huelva town’s former cemetery.

But family members complain that the bodies of up to 200 people, all murdered and dumped in a communal grave in the first years of General Franco’s dictatorship, still remain at the site. This is after municipal cemetery was moved to a different location.

“All we are asking is for the exhumation of these bodies before the houses are built,” said Igancio Avila, whose aunt he believes is buried in the mass grave.

The descendents of the victims have been campainging for an uncovering at the site since the plans for the housing project were passed in 2006. But the Partido Popular council is refusing to hear any exhumation request.

“We cannot understand the lack of sensitivity being shown by the town hall,” Avila added. “Work has started on the project, yet councillors refuse to listen to us.”

Mayor Juan Carlos Lagares has refused to comment on the complex, which is being built by his relative, José Antonio Lagares. His deputy, however, has criticised the family members for complaining about the project to the media.

“The mass grave will be under the gardens of the housing development. The bodies will not be touched. But nobody has complained directly to the council about this project. Instead, they have chosed to speak directly to newspapers and television,” said Manuel García Félix.

The socialist PSOE opposition in the town has filed an official complaint with both central and regional government to force council authorities in La Palma to follow the law.

Legislation introduced in 2007 is supposed to recognise the right to a decent burial of the 50,000 plus victims of the Civil War that are believed to lie in mass graves around the country.

“We believe this site should be protected. Nothing should be built in the perimeter of the mass grave,” said Aurelio Guerra, a spokesman for the PSOE.

But the family members are losing hope of an exhumation after diggers began work on the infrastructure of the complex.

“My father is buried here. When I was a young girl, he was taken by Francoists, murdered and dumped in this mass grave,” said 77-year-old Rosario Diaz, who still lives in La Palma, Huelva.

“My mother and two brothers are also buried here, I think. That is what I have been told. They were killed for belonging to a trade union,” said Manuela Pinto, 79.

The Association of Historical Memory, a group that has campaigned for the recognition of the victims of Dictator Franco’s repression, claims there are 500 bodies lying in several mass graves around the town.