• After a tip off to the paper, we tracked down and photographed Crimestoppers Most Wanted Daniel Johnston, sought for a string of violent robberies in the UK

Exclusive By Jon Clarke in Sevilla

HE didn’t know what was about to hit him.

As Daniel Paul Johnston walked out of the pub with his girlfriend he had no idea that his two year Spanish sojourn would soon be over.

Grinning, as he strolled down the road in 70-degree December sunshine, life couldn’t get much better.

Working as a handyman/builder in a quiet inland village in Sevilla province, he was living rent free at his girlfriend’s home.

He certainly appeared to have got away with a string of vicious robberies taking place in the UK between 2004 and 2006. 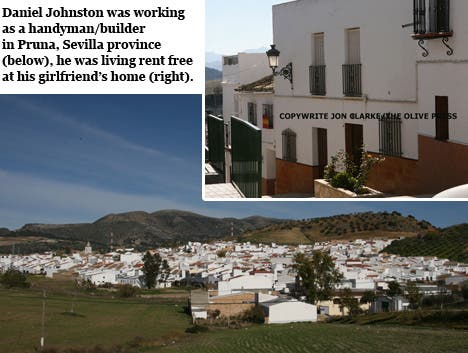 That is until one sharp eyed reader of the Olive Press spotted his mugshot in our report last month on Crimestoppers Operation Captura.

After tipping off the paper we then tracked him down to the house of his girlfriend in the village of Pruna, near Olvera, where a small community of Britons live.

And on Wednesday morning, his days in the sun were no more when a team from Spain’s crack National Police, alongside agents from the UK’s Soca, arrested him at his home.

A spokesman for Soca said: “I can unofficially confirm that we have picked up Daniel Johnston in Spain.”

Johnston, 28, was wanted for a spate of vicious robberies in the Swadlincote area, near Derby, between 2004 and 2006.

With his face partially covered and armed with a knife, on each occasion Johnston is alleged to have threatened staff in a series of off licences raids.

“These were serious crimes,” said Crimestoppers co-ordinator Debbie Ryan. “He really scared the staff in these raids and we would expect to get a good custodial sentence for him, if convicted.” 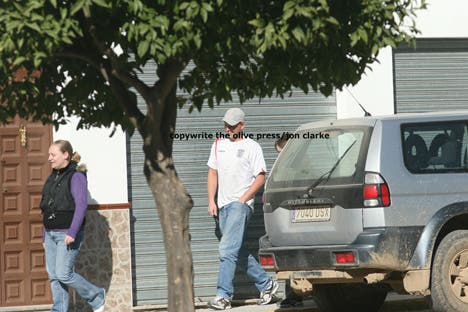 But unfortunately after police arrested Johnston, from Burton on Trent, he managed to do a flit to Spain while out on bail.

Tracked down via his fingerprints (suggesting earlier crimes), Johnston however, was charged with the four robberies in his absence.

“We knew he had gone to Spain which is why we included him in Operation Captura’s list of Most Wanted,” continued Ryan.

“It is already two years ago, but it would be good to get him back.”

It emerges that Johnston has been living amid a close-knit English community for the last few years, rarely venturing out of the village.

“He keeps a low profile, always wearing a baseball hat and rarely goes out of the village,” said one local source.

Driving a Renault van with a West Ham sticker on the back he has been working as a handyman at his local English pub Alba’s Bar.

Further enquiries reveal that until recently he has been working with a well-known local conman.

The Mancunian, who claims to be a builder, has apparently done a runner from the village for defrauding half a dozen fellow Britons.
He is also said to owe tens of thousands of euros to local builders yards.

Said the local source: “These two have ruined the lives of half a dozen families.

“They are a right dodgy pair and it has become something of a standing joke here that Danny was wanted back home for a spate of off licence robberies.

“No-one has reported him though as people’s attitude here is that he’s ‘all right’. ‘He’s a nice enough bloke and has not hurt anyone around here so leave him alone’.

“Christ, he´s even using the same name. Talk about brazen.

“The final confirmation came when I spotted his face in the Olive Press newspaper last month. And then his girlfriend was seen going around collecting up all the papers with his photograph in it.

“I think that is a disgrace and he needs to be picked up and locked up for all the trauma he has caused to the victims back home.

“Otherwise it sends the message that crime pays.”

The paper contacted Crimestoppers and Britain’s serious crime unit SOCA of his existence in Spain on November 19, but incredibly nothing was done until this week. 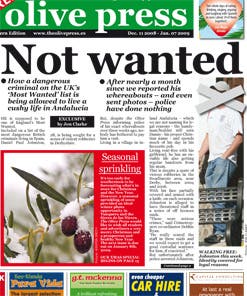 Realising that little was being done we ran a story on our front page about how Johnston was apparently going to get away with it.

Under the headline ‘Not Wanted’, we told how we had called Crimestoppers and SOCA a dozen times to try and get something done.

A spokesman for SOCA had told us humbly: “He wouldn’t be on the list if we didn’t want to catch him.

“He may not be Al Capone, but he is either significantly dangerous or serious in the crimes he has committed.”

He insisted the long time delay was due to the Spanish police, who had been alerted of his whereabouts a fortnight ago.

“We don’t have any say on when or how they are going to pick him up,” he added.