To coincide with the launch of its new edition, Rough Guide to Andalucia author Geoff Garvey tells of the highs and lows of travelling around the region

HAVING adopted the region as his home and trawled its four corners for numerous editions, Geoff Garvey, who lives in the Grazalema Natural Park, has seen a fair amount of weird and wonderful things in Andalucia. But every time he sets out to research a new issue of the Rough Guide – now in its sixth edition – there are plenty of surprises – both good and bad. Here are some of the best this time

You never forget your first Semana Santa and my baptism was pretty dramatic. Sleeping soundly in a hotel in the Macarena barrio after getting in late, I was rudely awakened by an ear-splitting bass drum being slowly and rhythmically thumped outside the window. Spooked, I leapt from under the sheets and threw back the shutters to reveal one of those sights that stays etched indelibly in the memory: a hundred Roman soldiers, their plumed helmets glinting in the first light, marching slowly down the street. 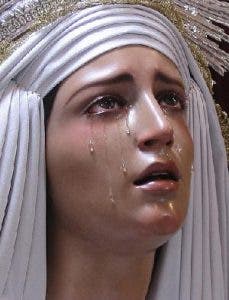 Behind them was a huge, glittering golden paso, or float, bearing a startlingly realistic image of Christ standing before Pilate. Suddenly, a phalanx of cornets shrieked into life making my hair stand on end. This, I was to discover, is Semana Santa in Sevilla.

Dining out in Almuñecar

Famed as the place where Laurie Lee once resided and which he disguised as Castillo in his classic As I Walked Out One Midsummer Morning, in truth Almuñecar is a fairly hum-drum seaside resort.

However in recent years it has reinvented itself as a centre of culinary excellence with a clutch of restaurants as good as any in Andalucía. El Chaleco, Morgan, Horno de Candida and Jacquy Cotobro are all outstanding places and worth a visit. Chaleco and Cotobro are both Belgian owned and offer a fusion of Belgian-French and Spanish cooking that is often inspired. Cotobro is the pick of the bunch, if only for location. Sited on a small bay with the waves almost lapping the table legs, a more enchanting place for a lazy lunch would be hard to imagine.

“Get out of my village!”

One day I was quietly getting on with my researches in a village in the Sierra Norte Natural Park to the north of Sevilla. The churches, however, were all closed and I could find no one to open them. I made a survey of the bars but found nothing in any way recommendable.

Then I got into my car to check out a hostal on the outskirts. I parked on the forecourt but found it also to be closed. I went around the back and climbed some steps to the rear door. Also locked. When I returned to the front of the building my car was flanked on one side by a Guardia Civil jeep and on the other by a large black limousine. Two guardia officers were peering into my vehicle and a corpulent, balding man in a black suit and open-necked white shirt emerged from the limo and strode towards me pointing a finger. He announced that he was the mayor and that I fitted the description of a thief who had committed a number of recent break-ins. “The thief´s car is a blue Volkswagen,” he added with a nod to my dark blue VW Polo. “We have seen you trying to enter churches and going into bars but not buying anything. And now you are behaving suspiciously at this property. What are you up to?”

His eyes blinked at me in utter incomprehension as he tried to come to terms with what I had just told him. I retrieved my copy of the Rough Guide from the car and showed him my notebook. He flicked through the guidebook, and then eyeballed me again, not entirely convinced before shoving the book back into my hand. One of the guardia officers moved near to my left shoulder.

“Do we take him?” the officer asked.

“No!” barked the mayor dismissively. Then he fixed me with the agonised stare of a poker player whose adversary has just produced an ace-high straight flush. “I don’t know who you are or what you are, but I want you out of my village – now!” he snapped. He returned to his car and the guardia officers got back into their jeep. As he moved off the forecourt the mayor rolled down the limo’s window. “And don’t come back!” he bawled.

The Return of the bone-breakers

My favourite natural park in Andalucía is the Sierra de Cazorla, a forested area in Jaén province cut through with river gorges and dotted with rocky heights. Recently I saw a Lammergeier, or bearded vulture, a species that disappeared from the park in the 1980s.

Thanks to a breeding programme using birds from the Pyrenees and Austria the raptor is making a comeback. Called the quebrantahuesos (bone-breaker) in Spanish after the bird’s practice of hoisting the leg bones of its victims high into the air and dropping them onto a rock below to split them and release the marrow, there is nothing quite so thrilling as to see these wonderful creatures gliding around the crags in search of prey.

Travelling the roads of Andalucía means spending a lot of time eating in ventas, Spain’s often-wonderful roadside restaurants frequently offering a menú del día for less than 10 euros. Lunching at one venta in Córdoba province, at the end of the meal the waiter asked me, as is customary, what I would like for dessert. When I enquired what was on offer he recited the familar Andalucian litany of flan, tocino de cielo, natillas, arroz con leche and pudin (pudding).

I then posed the question that any canny diner always asks in this situation: “Son caseras (are they home-made)?”

If they’re not, you will get something from the fabrica, or factory, which – as every Spaniard knows – will often be a confectionary disaster in a plastic cup or something equally inedible. But this time I was bamboozled by the waiter’s reply.

“Son casi caseras (they’re almost home made),” he said with a deadpan expression.

“How can they be casi caseras?” I asked.

“Because the fabrica is right next door,” he replied.

While visiting the city of Almería I came across Los Refugios (the shelters) a new visitor attraction and museum. It comprises a series of underground air-raid shelters used during the Civil War bombardments by Nazi and Italian aircraft and naval forces offshore. Constructed between February 1937 and the spring of 1938 city engineers excavated no less than 4.5km of tunnels with various access points to shelter 35,000 citizens. Open to the public for the first time as a museum, the tunnels are superbly constructed with ventilation pipes and shields to prevent fifth columnists throwing in hand-grenades – and there’s even an operating theatre.