SURROUNDED by orange trees and swathes of fragrant bougainvillea, it is the perfect palatial home to escape from the nightmare of the world’s worst ecological disaster.

But BP boss Tony Hayward might regret the style of the million-euro home, which has distinct shades of a Mexican hacienda.

With its low-pitched pantile roofs, and a central courtyard filled with fountains and a sunken kidney-shaped pool, it could easily be based on the shores of the Gulf of Mexico, where BP is responsible for the world’s worst oil leak.

But the lavish six-bedroom home, with a tennis court, basketball court and games room, sits near Gaucin in the hills above the Costa del Sol.

With incredible views towards Gibraltar and the shores of Africa in the distance, it is the perfect place to unwind.

With high security and a three-bedroom lodge for staff, it is ideal for a stressed out executive.

And if a little hot and bothered after another day in the firing line, Hayward can even take a dip in his own private lake sitting in the grounds.

Even better, if he fancies a bit of socialising, he has two millionaire oil industry chums living right around the corner. 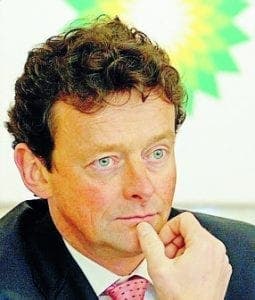 “It is why the area has got the nickname ‘oil corner’,” explained one British neighbour, who bought her home in the exclusive urbanisation 17 years ago.

“The place is now full of wealthy executives who want to get away from it all, but it is not the sort of place where people hang out and chat over the fence.

“You come here to escape from it all and not get bothered by anyone.”

She added: “It’s strange to think I’m living just a stone’s throw away from the man being blamed for this current world crisis.”

Bought last year for what the Olive Press understands to be around one million euros, builders have spent the last few months turning the place into a luxury retreat.

According to another close neighbour there has been “a steady procession of builders, fitters and workmen” driving up to the villa for the last few months.

“Hayward and his wife have spent a small fortune renovating the place,” he explained. “It had become quite run down, but now it is a palace.”

Spanish administrator Jose Antonio who manages the property confirmed: “He has been over here recently, but I doubt he will be back for a while with all the problems in the gulf.

“He is a good man and does not deserve all the stick he has received.”

The house is registered in the name of his wife Maureen, who is overseeing the project.

“She is the main brains and drive behind it,” said the neighbour. “She has been liaising closely with the local builders and architects to make sure everything goes to plan.”

Yet inevitably the embattled oil chief – whose main home is in Sevenoaks, Kent – has still managed to upset at least one local since he bought the house.

For, within just months of buying the palatial outpost he laid off the loyal gardener who had looked after the place for over a decade.

According to the neighbour, Hayward laid off the worker as he wanted to employ an upmarket English landscape gardening firm.

She said: “He was so sad to end his time at the home.

“Those gardens were kept in perfect condition, but clearly Hayward doesn’t care about the little people.”

Last night a spokesman for BP said: “I don’t know anything about Anthony owning a home in Spain. And I would not comment even if I did.”