A CAMPO wild fire broke out on Saturday morning in Jimera de Libar in the Guadiaro Valley, near Ronda, forcing the evacuation of the riverside camping ground as a safety measure.

The two-hour blaze began alongside the Algeciras – Ronda railway line which is still undergoing improvements although it has been re-opened for several months.

The emergency services, INFOCA and four fire-fighting helicopters were quickly on the scene and doused the rapidly spreading flames with water from the village’s municipal swimming pool.

Despite the proximity to the pueblo it did nothing to dampen the atmosphere of the village’s five-day feria that ended on Sunday evening.

The entire province remains on ‘red alert’ for wildfires. The area’s wet winter caused unprecedented growth of weeds, grasses, and bushes, which have now dried out and pose a fire threat this summer.

The Junta’s environmental officer Remedios Martel explained that the greatest risk will be from mid June to mid August. 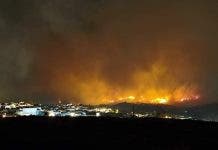 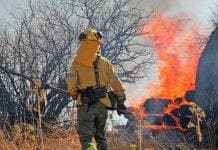 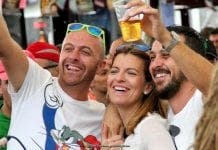