By Jon Clarke and Wendy Williams

But the liaisons with a teenager that he had taken under his wing to compete in the so-called WOW Factor talent show, has caused more of a slasher movie to the career of one of the coast’s most famous celebrities.

Whether you loved him or hated him, few lacked opinions about DJ Maurice Boland – aka ‘Mr Marbella’ – who over a two decade career has interviewed some of the world’s biggest celebrities through his radio talk show.

He so impressed his subjects that novelist Jeffrey Archer described Maurice as, “the professional’s professional”.

He added: “He is very hard working, very demanding in his research and above all – which is not the case with all journalists -he is very fair. He sees both sides.”…

It came after the parents of the teenage girl – who we are not naming out of respect for her family – turned up to confront him as he was mid-way through his radio chat show at Talk Radio Europe (TRE) a fortnight ago.

As the Olive Press reported exclusively in our last issue, he had been forced to leave the studio and face the music – excuse the pun – and explain how his apparently ‘professional’ relationship with the young singer, had turned romantic.

While it is still unclear if the police were in some way involved, there was certainly a heated exchange, which led the normally calm station boss Martin Nathan to insist that Boland had to go.

Effectively spelling the end of his radio career, the station,and the Olive Press’s own website, was inundated with a deluge of angry comments from his loyal listeners.

In particular, they picked out the hypocricy of his actions, publicly criticising Catholic priests on the radio, while at the same time having an af-fair with a teenager.

Meanwhile there were a string of further unsubstantiated rumours flying around about the businessman, who had set up on the coast as a nightclub empresario in the 1980s.

The local Jewish community was particularly shocked by the actions of its community Vice President, who has now been deprived of his ‘guidance’ role.

One former TRE colleague, television producer Barry Mitchell, who has known Boland for 20 years, says he was not surprised that the DJ had taken up with a 16-year-old.

Mitchell said Boland loved it when, on occasion, young choirs would come to the radio studios and often made inappropriate comments about the girls.

‘Two or three of us would look at each other and raise our eyebrows, knowing full well that he was serious,’ Mitchell said, ‘And hindsight has proven that to be true.’ 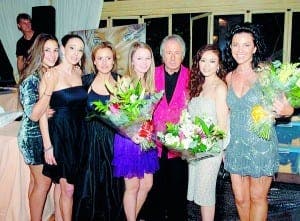 Eventually, in a bid to stem the spiralling rumours, Boland last week apologised to the family of the girl – and his own family – in the Irish national newspapers, before issuing a limp statement to the local press here in Spain.

In the only comments that have been run, he whined to one: “I fully expected that it would become public knowledge. But I did not expect the hurtful and negative gossip directed towards both her family and mine. This is a highly personal issue and I would ask you to please respect the other people involved.”

His request is understandable, but for many people who have tuned in for years to hear him tell his listeners how much he loves his wife of 40 years, his admission that he made an “error of judgement” does little to placate their outrage.

They might also be interested to hear a bit about his past, about how some 20 years ago he became incredibly close to one Mandy Smith, who infamously slept with Rolling Stone Bill Wyman when only 14.

One might be inclined to ask the question, is history repeating itself?

A huge scandal, she was the Catholic school girl; while he was apparently the celebrity who could make her a star.

Yet, there was another older man waiting in the wings, who was handed the task of guiding her career to stardom.

Enter Maurice Boland, who became her manager after they met at his nightclub Cuba, on Marbella’s Golden Mile.

Under his guidance, the budding star secured modelling jobs and pursued a singing career which led to a string of hits.

While there has never been any evidence to suggest any wrong-doing on Boland’s part, how close exactly, was the relationship between him and Smith?

Move on two decades, and the greyhaired empresario – a wealthy man with impeccible contacts on the Costa del Sol – was once again, in the perfect position to aid yet another fame-hungry starlet.

With a passion for singing and a clear theatrical bent, the then 15-year-old blonde was quickly encouraged to enter the local X-Factor-style fame competion the WOW Factor.

In November last year, Boland was effusive in his praise for the teenager, as he stood by her side in a gold lame Versace jacket.

The founder of the competition touched her hand and stroked her arm, before explaining how she had been too young to enter the contest the year before.

Her adoring family looked on with pride as their 15-year-old did well and went on to perform a string of charity concerts along the coast, with none other than ‘Mr Marbella’ always acting as a chaperone.

It soon became clear – indeed to two separate Olive Press sources – that she had become infatuated with him and he was increasingly becoming fixated with the pretty blond teenager.

On her MySpace page, there are still numerous pictures of her with her svengali, as well as others of ‘the innocent teenager’ blowing bubbles.

At a recent dinner at a well-known restaurant in Marbella they sat in the corner with each other, quietly ‘cooing’.

“He even had the audacity to come over and tell me he had fallen in love,” said one fellow diner. “He said he had become the new playboy on the coast and was very happy.

“It was pretty sick-making.”

The relationship with the girl – whose family are said to be multi-millionaires living in the exclusive enclave of Sotogrande – rapidly developed and they began spending increasingly large amounts of time together.

Boland admitted to an Irish Sunday paper: “It was a very short involvement and it was never planned. Some of these things just happen.”

The parents however, did not see it that way.

Enfuriated when they saw a photo of the pair looking “unnaturally close” in society magazine Essentials, they decided to confront their daughter, who attends the nearly 20,000 euros-a-year Sotogrande International School.

The next day they turned up at the studio where, according to sources, they managed to get past the reception and were just metres from bursting into the studio to confront Boland live on air.

The ensuing chaos understandably put an end to his long radio career that had spanned decades. 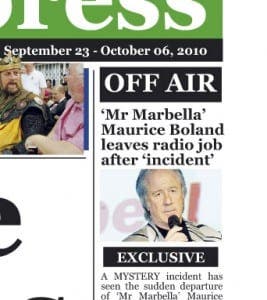 While born into a respectable Jewish family in Dublin – both his parents were doctors – he was always attracted to a rather more demimonde unorthodox career.

He admitted that he had lost his virginity to a German prostitute in a magazine interview last year, and always dreamt of a career in showbiz.

He opened nightclubs in Ireland and he and his model wife Wendy Gilbertson were regulars in the Irish gossip columns.

But by the end of the 1980s, Boland grew tired of his native Ireland and decided to try his luck in Marbella.

He bought Oscar’s, a disco that had been owned by Formula One driver James Hunt. And from here, he went on to present the first radio show in English on the coast and in quick succession he launched the H! Society magazine.

Then in 2004 Boland helped to launch a radio station REMfm, which, along with his magazine, was allegedly part-funded by a pair of shady Russians.

Somewhere along the lines the Russians – who also controversially ran the Mijas racecourse and owned Majestic TV – parted company with the station that was last year rebranded as Talk Radio Europe.

It was through his radio and media dealings – plus his tireless charity work – on the coast, that he made his name as ‘Mr Marbella’.

His success led to numerous trappings, such as his top of the range black Mercedes, and a luxury villa in the hills above Estepona.

But, could these trappings of wealth now be coming to an end?

He says he is now “withdrawing from public life” for the foreseeable future and this year’s WOW Factor has also been cancelled.

Oh how the mighty fall.

In an article published in the Dubliner in 2008, the publicist Max Clifford was quoted as saying: “He has never ceased to tell me how successful and famous he is. And according to the people who work for him at the station, it’s true. I’m sure he’ll eventually turn into the superstar he thinks he is.”

And this seems to be the impression many people have of him, a self-publicist who never tired of his own voice and was forever blowing his own trumpet.

But now, perhaps ironically, the man who has strived to be the centre of public attention for so long has finally achieved the notoriety he craved.

As he said in an interview several years ago: “Someone who does my type of work will be probably disliked as much as they’re liked.”

And on that point it would appear he is right.