Three of the loveliest pueblos blancos of the Guadiaro valley in our part of Secret Andalucía are Montejaque, its neighbour Benaoján and the stunning jewel in the crown, Ronda.

Montejaque, at 689 square metres above sea level, nestles in the shadow of two mountains, Hacho and Tavizna.  With a population of 1004, it’s small and quiet. The barrio nazarí, the old Arab settlement tucked in at the top of the village, is charming with higgledy-piggledy houses and narrow alleys originating from the days of the Moorish occupation of Spain, between 711  and 1492. This layout was designed to keep dwellings cool in the heat of summer and sheltered and warm in the cold of winter.

Over the years a number of these older houses, many of which were nothing more than ruined hovels or animal shelters, have been bought up by northern Europeans and renovated into holiday cottages or permanent homes.  Some 20 or so guiris (foreigners, half of them British and Irish) live in Monty Jack on a permanent basis, and another score or so own properties here which they visit from time to time or rent as holiday lets.

The surrounding land is given over largely to olive cultivation and cork production.  The village is now quite thriving, with significant construction work in the newer, lower part of the village still ongoing despite the recession.

Benaoján, by contrast, is a pork town, with a number of processing factories in the village itself and down the hill in Estación de Benaoján,  its sister settlement alongside the railway line to Algeciras.  With an overall population of 1,629 Ben and Joan are famous for their chacinas y embutidos, ie hams, sausages, cold meats and other pork products, derived from the ubiquitous black pigs which roam freely feasting on acorns from the thousands of oak trees. Benaoján is evidently more industrial and a touch shabbier than its neighbour up the hill.

Also in the lee of a mountain, at 564 meters above sea level, it gets the early morning sun but goes into shadow early in the evening.  It too has had a small influx of foreigners, also around 40, and it is a friendly place.  Ben and Joan is larger than Monty Jack and has more amenities, such as a modern health centre, all-weather football pitch, municipal outdoor pool, petrol station and repair garage, a newsagents and a florists.

Both villages are about 20 minutes by road from magical Ronda, the highest of the three pueblos at 739 metres and the largest town hereabouts.  Ronda has an official population of around 36,500, over 1,400 of them foreigners, and offers a full range of shops, services and other amenities. Its historic old town, the emblematic bridge (el Puente Nuevo), the oldest bullring in Spain and lots of monuments and museums make this a must-see place.  Hotels, bars and restaurants of varying types and prices abound.

Whilst Big Ron, known as the Ciudad Soñada (City of Dreams), can boast a wide range of amenities and is a great town, Monty Jack and Ben and Joan are quieter and slap bang in the middle of the most spectacular scenery you could wish to see.  The whole of the Guadiaro valley is a delightful area for a holiday, or even better, for living in.  Why not come and visit?  There is plenty of holiday rental accommodation of differing types and to suit all tastes and pockets, or your dream house could be just waiting there for you to discover it.

The following websites provide listings and other information on the area: 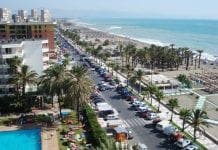 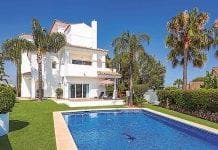 Is this the best-value villa for sale in Marbella?