WHILE I had planned to kick things off with a light entry on something like flamenco or food, the “serious news” paraded past my window last week and I had no choice but to heed the call.

Last Thursday evening, while perusing Jerez’s beautiful public library, I heard muffled shouts from the street below. The cries grew louder and louder until they filled the quiet library and I headed down the stairs and out the door to investigate. A group of almost 100 men, women, and children were marching arm-in-arm down Calle Porvera, a busy commercial street in the historic center of Jerez. Most of the women wore patterned veils, holding signs written in Spanish and Arabic. The men waved flags of green, black, red, and white. Everyone chanted “libertad Saharaui” at the top of their lungs.

It didn’t take long to learn that this was a call for Western Saharan independence from Spain. I tagged along with the protest, meandering somewhere near the back until the demonstrators reached their final destination at the main square, Plaza Arenal. They surrounded a small podium and fell silent while several people gave speeches. Each speaker called for justice, peace, and international cooperation. Each also explicitly requested a referendum granting Western Sahara both independence from Spain and protection from Morocco.

For those who might not know – I had only the vaguest idea before coming here – Western Sahara is a territory in Northern Africa that fell under Spanish rule in 1884. After nearly a century of colonial occupation, Spain abandoned the territory in 1975 during the tail end of the Franco regime. Spain promised to legally grant Western Sahara its independence, but failed to do so once Morocco began to push its own borders into the territory. Rather than stand up to the invasion, Spain let it slide.

From 1975 to today, Western Sahara has been a hotbed of border disputes, exploitation, and human rights violations with Spain’s name still on the lease. Morocco has pushed to annex the land while the Western Saharans, or Saharawi, have refused to surrender. The violent conflict last week in Western Sahara, in which at least 10 people (Moroccan and Saharawi alike) were killed, was the result of tensions built up over years.

After the speeches, I was able to talk with several of the demonstrators and I noticed that each person had one bottom line: Spain did this. Larabas Labeidi Saharawi, a Western Sahara native enrolled in a Master’s in Economics program at the Universidad de Sevilla, explained that Western Sahara is uniquely crippled by its predicament as a territory without a protector, yet a land deprived of independence. “Spain is responsible for all of this,” he said. “We cannot properly defend ourselves because we are not our own country. We still, after 35 years, do not have a legal document that says that we are free.” 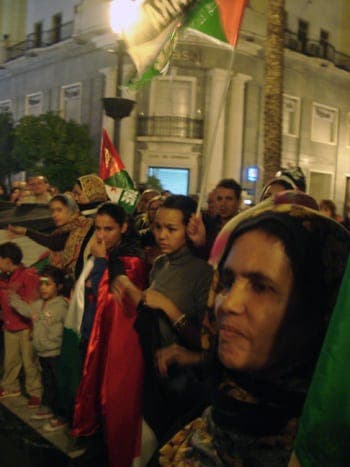 Labeidi Saharawi also noted that the Moroccan government had been violating Western Saharan human rights. “They are occupying our land illegally,” he said, further condemning a Moroccan annexation of Western Sahara. “We are not Moroccans. We don’t have the same identity.”

Fadel Mohammad, one of the organizers of the march and the event’s keynote speaker, also condemned Zapatero’s decision to take no stance toward the attacks. “If Spain watches what Morocco is doing to us and does nothing, then it is equally culpable,” he said. “Complacency is a crime because Spain has a responsibility to Western Sahara.”

Both men were sure to point out the growing number of Saharawi living in Andalucía, many in the city of Jerez de la Frontera. They explained that some are here as refugees – seeking shelter in the very nation that they hold responsible for their oppression– while others come to work or study at university.

The crowd slowly dispersed and I returned from the protest wide-eyed and confused. I was excited to have caught a glimpse of something so vibrant and imperative; the march was my first real encounter with anything North African in Jerez, a region known for its Arab influence and proximity to the Strait of Gibraltar. However, my lack of prior knowledge on the issue frustrated me deeply.

I found myself trying to contextualize the issue, to place it in the overarching themes I had learned at school about Spain and the makeup of the modern world. I read more about Western Sahara in the days following the protest, hoping to gain more perspectives and a deeper understanding. Despite my efforts, I still have a hard time grasping the dilemma.

In which box of Spanish history does this ordeal belong? Does it fall into the East meets West, Andalucian melting pot? Or is it Spanish colonialism, set on a shelf next to the Americas and the Caribbean? Is there a difference? And more importantly, what can anyone do to resolve the issue?

Everyone learns that a long time ago, the Europeans exploited the indigenous, claimed the land, and reaped the rewards. Then there were the colonial years, the years of rebellion, and finally the revolutions. End of chapter, tisk tisk, and lesson learned. The truth usually lost on settled citizens (like me!) of settled countries (like the USA!) is that not all the dust has settled from colonial times. The borders are forever malleable and there are people in all corners of the globe still trying to push those lines or perhaps etch them into the ground for the first time.

Right there in front of me was an issue both pressing and current yet forever tied to the universal narrative of colonialism and cultural contact zones. Even in a small city like Jerez de la Frontera (frontera meaning “border” in reference to the line between the Christian Kingdom of Castille and the Moorish territories in the 16th century), these issues are not history yet, not even close.

I look forward to further educating myself on this issue as it unfolds over the course of this year. If any readers wish to weigh in or perhaps elaborate on my paltry summary of Western Sahara and its relationship with Spain, I would greatly appreciate it.

And not to worry, I will contrast this entry with several to come on such serious issues as sherry tasting, Irish pubs, Intercambios, Christmas, and beaches.

A very Happy Thanksgiving to all in the States.

ON a second visit to Spain’s unspoilt Costa de la Luz, Jo Chipchase was finally switched on to its beautiful beaches and illuminated villages…...