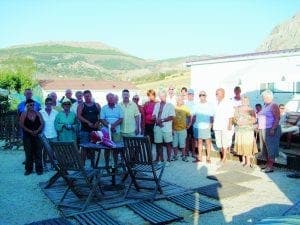 TRENCHES have been dug in a vicious hate campaign between two groups of expatriates at a mobile home park in inland Andalucia.

On one side; a large group who have been cut off from electricity and water. On the other those who haven’t.

Now, it has emerged that the vicious rivalry between the neighbours at Villa Alta Holiday Park in Alfarnatejo has led to intimidation and assault claims.

“We have had plants cut, pots smashed, messages written on cars, wheel nuts loosened. People have even been assaulted,” said Terry Crawford, 52, one of the residents paying the bills.

“It is absolutely horrendous. And my wife and I feel unsafe living here.”

Last year, the Olive Press reported how dozens of expatriates had been left in turmoil after their landlord cut off their electricity and water supplies.

They told the paper they had been subjected to ‘bully boy tactics’ after refusing to pay a 250 per cent increase in their monthly bills.

Now it has transpired that this was only half of the story, as dozens of other British residents were, in fact, happy to pay their bills.

The paying group claims that they have been subjected to a ‘hate campaign’ for trying – in their words – to make the place a ‘happier, cleaner environment’.

They insist the non-payers have made the place ‘lawless’ and unpleasantly noisy and smelly with a series of generators they have installed.

Camp owner Daniel Pertica, 50, told the Olive Press the police were frequently on the site and insisted he was in the process of trying to get the non-payers evicted.

He said: “It is very stressful. There is a group that has radicalized themselves and they are very antagonistic to the rest of the residents and my personnel.

“Some people have even been beaten up.“

“The police are here every other week and I have had to go through the lawyers as they won’t talk to me directly.”

He added: “I am now in the process of going through the courts to have them evicted as at the moment they are squatters, paying absolutely nothing.”

However, resident Anthony Donnelly, who has now been living without electricity for 18 months, was dismissive of the accusations.

He said: “What they are saying is incredulous; it is all a pack of lies.

“We do still need electricity and we are waiting patiently for our own case to go through the courts.

“There has certainly been no aggression or threats on our part.