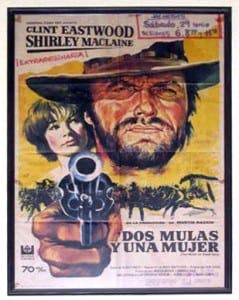 A NUMBER of Spaghetti Westerns were filmed in the province of Almería in the 1960s. Films included A Fistful of Dollars, For a Few Dollars More and The Good, The Bad and The Ugly.

The production of these films in the region has led to the development of a number of Western-based theme parks in the province.

Recently one of the readers of our Almerimar website, JCA, had reason to decide to choose one of three theme parks to visit with his wife and his niece (an adult rather than a child).

He provided us with the following information that I thought might be of interest to people wanting to have a day out in the province of Almería.

“Here is a short update on the Western Sets in Tabernas.

Today Monday 6th December 2010, a national holiday in Spain, we decided to visit the Western set in Tabernas. Information on the internet was not overly helpful.

The first problem encountered was that travelling from Almería towards Guadix on the A92 motorway whilst the Teepees and Western towns were visible no signs informing you of the correct exit were visible.

The exit to take is for Tabernas and I travelled past thinking there would be a sign at the next exit. The next exit is about 6 kilometres further on and I had to turn back.

When I left the motorway at Tabernas exit, I realised that there are three Western based theme parks.

Admission included trip on open top two horse carriage. We arrived around 10.45 when not many people were there. We took the coach ride, no queue and a good 15 minute trip around the whole town, the cemetery and the fort. Good banter with the coach driver who incidentally was one of the main artists in the spectacular.

The spectacular was in the main saloon bar with Can Can girls who had also been serving the visitors wearing their kit. The spectacular lasted about 50 minutes and was an excellently staged comic western with adult & young humour.

There were also restaurants and photo opportunities available. The restaurant does a Menu of the Day for 12€ and has a comprehensive a la carte menu. Drinks were not over expensive.

Cinema Studios was excellent value for money and had sufficient interest to spend at least four hours. I would certainly recommend this venue on anyone’s list of places to take visiting friends.”

A while back I went to Oasys with Jacqui, my sister, her partner and their two children. It was an OK experience but I think that the kids enjoyed it more than the adults. From JCA’s comments I think that Fort Bravo is probably a better choice for adults.