The architect’s plans did not meet with our approval – nor that of our neighbours’.

“Your roof terrace will be overlooking our patio,” they said.

The Town Hall was consulted: “The neighbours must build a higher wall so they cannot be observed.”

A compromise was reached. Now everyone can sunbathe naked.

THE LITTLE HOUSE THAT GREW

When we next visited the village in Spring 2007, most of the new exterior walls of ‘La Otra Casa’ had been built. Construction took place during the previous winter, and Cristobal regularly sent us photos of its progress.

It is said: “A picture paints a thousand words” – but the photos didn’t convey the ingenuity of Cristobal, his builders and the architect. We were, in fact, almost speechless when we saw what had been achieved. 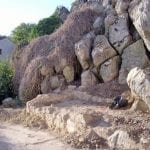 Inside the original donkey shed, before we knocked it down, there was barely room to swing a cat (let alone for a donkey to turn around)! Standing in the middle of it, with arms outstretched, I could almost touch the left- and right-hand walls. On the piece of land we cleared, we could see it was going to be a bigger area – but we didn’t realise how big, until we stood inside what was to be our master bedroom and en suite bathroom. The area now measured 3.4 by 6.6 metres, with the extra width being achieved by building the back wall into the mountain behind the house. 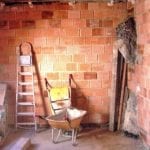 We were inspired by the rocks jutting out of the bedroom wall to build the shower unit around them for our en suite bathroom. The bedroom itself then measured 3.4 by 4.25 metres, with a ceiling height of nearly three metres. I never dreamed we would be able to fit a queen-sized four-poster bed into the new house – but there’s plenty of room to do so, and even to have a ceiling fan whirring above it.vMore rocks were a stunning feature in the entrance hall and under the stairs – was this really the area that had previously been the goat shed? And the original house? It had become a hallway, bathroom and guest bedroom … and comprised less total square metres than our new bedroom and en suite.

By August 2007, the second storey and the internal walls had been completed. There was also an enormous roof terrace that afforded us stunning views over the mountains – as well as onto the patio of our opposite neighbours.

We had originally asked for the terrace wall to be chin-height, thereby affording me the privacy to wander about and sunbathe topless. The waist-high wall that Cristobal had built was aesthetically pleasing, but I would be exposed to the street – and overlooking our equally exposed neighbours.

Cristobal assured us we were within our rights to have only a half-wall; he said the Town Hall had been consulted, and if the neighbours didn’t want to be overlooked, they would have to build a higher wall around their patio.

“Are you going to tell them to build a higher wall? ‘Cos I’m not!”

We persuaded Cristobal that we did, indeed, want a higher wall on the roof terrace – and we had it ‘faced’ in rock so that it blends into the mountain behind the house.

One day, Cristobal asked me to join him at ‘La Otra Casa’ to decide on the location of sockets and lights. He met me in the entrance hall, can of spray paint in hand, and expected me to make my decisions there and then.

Well, experiences at ‘Casa Alta’ had taught me a great deal about where I ultimately wished I had put more sockets and light fittings when I had had the opportunity to do so. I therefore asked Cristobal to trot off with his spray paint, and to give me a couple of days to make up my mind.

I drew floor plans of every room in the house, and marked on each the location of sockets, wall and ceiling lights, radiators and outlets for the telephone, computer and satellite TV cables. Most important of all, however, was deciding on the plumbing and lighting requirements in the kitchen. How lovely to have illuminated, glass-fronted cupboards over the worktops … but a bit difficult to achieve if you haven’t planned wall lighting. Extractor fan over the stove-top? Yes, please. Washing machine, dishwasher, refrigerator, oven, wine fridge, water cooler, double-sink – the positioning of all of these had to be worked out well in advance of when the kitchen was actually going to be fitted (April 2011, in fact … the last thing that will be done).

When I next met with Cristobal (his trusty can of spray paint in hand), I gave him my floor plans and showed him what I wanted. I had also learned the Spanish words for socket (enchufe), light fitting (guarnición) and light (lámpara … as opposed to ligero, the opposite of heavy!) and radiator (radiador). Pity I still couldn’t do more in a restaurant than order a glass of red wine …

IN PICS: Madrid apartment shoots up in value by €200K after renovation

Walter Finch - 8 Feb, 2023 @ 15:45
A Colombian man has been charged with attempted murder after stabbing his partner multiple times in Valencia. A 53-year-old man was arrested at 4am in...