AS soon as I heard Tiger Woods had been a former guest I knew it was time to dust off the old clubs. 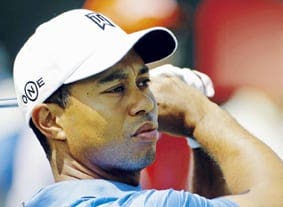 I figured if I could spend a night in the suite he had rented while playing in the 1997 Ryder Cup, a bit of the Tiger magic might rub off on me.

Lying back watching a re-run of the famous moment Colin Montgomerie won the Ryder Cup for Europe, I really got myself psyched up.

The recently reformed San Roque golf resort is the perfect place to head for someone looking to reaquaint themselves with the sport.

Slap bang next to the emblematic same-name course, this spacious hotel is the ideal place to relax and take your mind off the grind of everyday life.

Set in mature grounds, with superb landscaping of cypressus, palms and orange trees, this is every golfer’s dream.

For this is where both Ryder Cup teams stayed when Europe just pipped the yanks on the last hole at nearby Valderrama.

It was here that the European team (Clarke, Faldo, Woosnam and Westwood and all) had their HQ and here – in the sumptuous nearby clubhouse – that the tactics and gameplan was formulated.

Aside from Tiger’s soon-to-be-renovated room, there are 100 more suites nestling into the two hectare site.

After a few years closed, it is finally going through a much needed renovation and spruce up.

While I was hellbent on staying in Tiger’s former abode, most will prefer the series of recently upgraded rooms, such as ‘Suite 3’. More stylish, with Indonesian-style natural floors and sleeker furniture, they are incredibly good value, particularly as most have their own sitting rooms and separate kitchenettes.

After a great night’s sleep – where I lay back and thought of Tiger Woods’ conquests (both on and off the golf course!) – I was all set for my first round of golf for five years.

In many ways, it is little short of amazing that I have not managed to squeeze in a single round despite living in an area where there are over 50 golf courses within an hours drive.

A combination of having a family and setting up a local newspaper has dramatically curtailed my leisure opportunities over the last half decade.

While in the olden days I would sneak out for nine holes whenever I had a spare hour or two, for the last few years I have been back home changing nappies when not working on stories or negotiating deals for the Olive Press.

So it was with some trepidation that I stepped up to the tee on the first hole of the new course at San Roque.

Having negotiated a tee off time a good 10 minutes apart from anyone else, I knew I wouldn’t have anyone witnessing my infamous screw off the first tee.

And there I stood, all relaxed, mind entirely focussed on hitting the ball, the lovely Sierra Bermeja mountains in the background and the long first fairway stretching out in front of me.

It felt good to be back and as I dusted off my Big Bertha the memories came flooding back.

But just as I was about the lean in with the first drive of the day, up they popped. A pair of Scandinavians, all urdy gurdy, dressed head to toe in all the latest golfing gear.

Both noisy and irritatingly cheerful, worst of all they were pushing those annoying electric trolleys.

It was exactly what I had dreaded and as I quickly leant back to swing in a bid to get a head start I screwed the ball into a deep hedgerow, not 30 yards from the tee.

Rushing off, without even attempting to find the ball I was thankfully able to hit a decent four iron to reach the fringe of the green with my second shot. A putt to within a foot of the pin and I knew I was away. 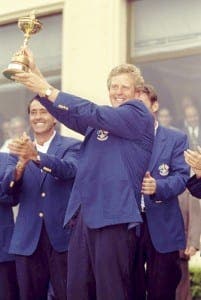 From then on – completely undisturbed – I played a blinder. The fabulous course, both undulating and wild, had superb views, often across the sea, and best of all, unlike many of the courses up the coast, little development to mar its boundaries.

It was an absolute joy to play again, and even better to be able to brag about a close hole-in-one on the 17th to former Spanish Open champion Eddie Polland and ex-England defender Derek Statham in the 19th hole over lunch.

The pair, who had been playing at the next door old course of San Roque, were, by chance, having a bite at their old friend Greg Fellows’ new restaurant Tangos.

He, himself is a former football professional, but now dedicates his time to running his excellent eaterie.

It is really helping to bring an all-round revival for the celebrated golf club, which was set up by Japanese businessman Asahi Kanko in 1990.

Designed by David Thomas and Tony Jacklin – and more recently with tweaks from Seve Ballesteros – the 72 par championship course is 6,134 metres long characterised with oak forest and some tricky water hazards.

Said to have cost one million dollars a hole to create, the area was once a country estate owned by Jerez’s wealthy Domecq family.

The clubhouse itself, a classically Andalucian affair with deep red hues and terracotta floors, was once the home of US golf legend Jacklin.

“It was obviously an amazing time in 1997 when the Ryder Cup was here and we had all the stars wandering around and practicing,” explains marketing boss Leanne Delaney, a Gibraltarian, who has worked at the club for over a decade.

“But we still often get the big names including Lee Westwood, thanks to the European Tour coming here.

“Quality is high on our agenda and we are very careful about water use and the types of grass that we use.

“It may not be as famous as Valderrama, but it is certainly one of Spain’s best courses.”

It certainly felt like a great comeback for me. Maybe next time one of my kids will caddie.

Top deals
A suite costs from just 60 euros a night per couple, while at the golf course Olive Press readers have a superb offer of a buggy and two green fees for just 100 euros. Make sure to quote the paper (or better bring it) when you go.