MILLIONS of expats and holidaymakers will be glued to TV screens and scouring their daily papers to get the latest news on the royal wedding next week.

But, how many of them know that even here in sunny Spain there are numerous links to the royal couple.

Here, the Olive Press looks at everything you need to know about the Spanish connections to Prince William and Kate Middleton’s nuptials on April 29…including a profile on the black sheep of the Middleton family, who predictably lives in Ibiza. 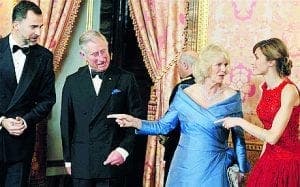 In something of a royal boob, Prince Charles had to personally intervene after it emerged Spain’s Prince Felipe and wife Letizia – who just hosted him in Madrid – had been left off the guest list.
Only King Juan Carlos and Queen Sofia had originally been invited making for an uncomfortable moment during Charles’ recent visit with his wife Camilla.
The situation was made even worse when it emerged that the chairman of Spanish tiling company Porcelanosa Manuel Colonques and his wife Delfina had been invited.
Fortunately the Prince of Wales quickly found room for the Spanish royal couple, who, after all that, will now be the Spanish royal representatives at the wedding alongside the Queen.

To coincide with the nuptials, TV channel Antena 3 will be showing the American made TV-movie William & Kate.
The film described as ‘the naffest Royal movie ever made’ charts the couple’s relationship from their meeting at St Andrew’s University, to their engagement in November 2010.
Starring unknown actors, British actress Camilla Luddington, 27, and New Zealander Nico Evers-Swindell, 31, the film was shot in February; just months after the real couple announced their engagement.
Antena 3 will also air the documentary ‘William, Kate and 8 Royal Weddings’ based on archived footage. 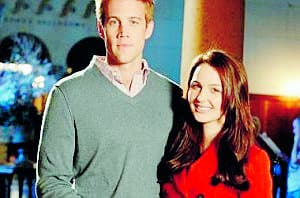 Spain is connected to the British Royal Family through blood. Crown Prince Felipe is actually the Queen’s cousin, and, just like Prince Charles, he is a great–great-great–grandson of Queen Victoria.

A keen football fan, Prince William had a lot to say to King Juan Carlos (see below) when he sat next to him at Rome’s Stadio Olimpico to watch the UEFA Champions League Final between Manchester United and Barcelona, in 2009.
Although they weren’t supporting the same side the two royals met before the match and afterwards William could be seen comforting now-Real Madrid star Ronaldo after his then team were beaten 2-0. 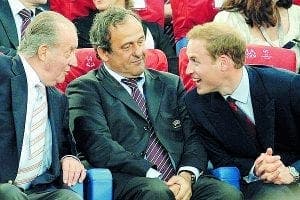 After the Daily Mail quoted an 80-to-1 chance that Prince William and Kate Middleton would choose Benidorm for their honeymoon destination, the local mayor decided to improve his odds.
Agustín Navarro sent an official invitation to Buckingham Palace, saying it would be an honour if the couple were to choose Benidorm for at least a ‘stopover’ after their marriage.
To further entice the young couple he promised security guarantees as well as ‘a good climate’.

A much more likely honeymoon hideout is the enormous Finca La Garganta, which sits in Cordoba on the border with Castilla la Mancha.
Bought by the Duke and Duchess of Westminster (William’s godmother) the Prince has already holidayed at the secluded estate on various occasions and with a sprawling 15,000 hectares of land, privacy is more or less a guarantee.
One of the many homes on the estate boasts its own jacuzzi and sauna, and a local restaurant counts the King of Spain among its regulars.
They could even indulge in a spot of hunting, a hobby the couple share.

While not exactly known for his clubbing, Prince William took his bride-to-be on a summer holiday to the party island of Ibiza four years ago. T
he pair hired a yacht and were pictured swimming about in the Med, alongside various friends.
Most memorable proved to be the photos of Kate looking stunning in a small white bikini which, perhaps inevitably, have now resurfaced as the nuptials approach.

Princess-in-waiting Kate Middleton has revealed her favourite riding boots are made in the Huelva town of Valverde del Camino.
She has the boots imported to the UK from the Herce-Valverde company, which has also sold to the late Princess Diana, as well as the Cuban tourist ministry. 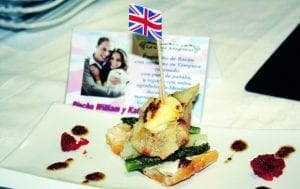 A taste of royalty

In honour of the big day a Benidorm restaurant has dedicated a tapa on its menu to the happy couple.
The dish, called ‘William and Kate’ comprises bacon, seasonal vegetables, garnished with asparagus, and honey and mustard dressing.
According to restaurant owner, Javier del Castillo, it uses the flavours the English love but will also appeal to the Spanish palette. 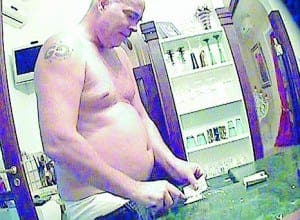 THE man who once called Prince William ‘a f***er’ and claimed he would become the Duke of Slough is set to rub shoulders with the Queen.

Kate Middleton’s Spanish-based tattooed uncle Gary Goldsmith has finally been confirmed on the guest list for the royal wedding and will also attend an intimate Buckingham Palace banquet.

There had been a huge question mark over whether the only brother of Kate’s mum, Carole would get an invite after bringing shame on the family in a tabloid sting.

Cannabis-smoking Goldsmith earned his notorious reputation as the black sheep of the family thanks to his antics at his 5.6 million euro Ibiza villa, La Maison de Bang Bang.

He was also filmed cutting up what appeared to be cocaine during the investigation by undercover reporters in July 2009.

The footage showed him openly bragging about his Royal connections after Prince William and Kate had previously stayed at the villa.

The tycoon claimed to have greeted Prince William with the immortal line, ‘Oi, you f***er!’.

The twice-divorced rebel, who has a daughter in Manchester, also joked that he would become the ‘Duke of Slough’ once the couple were married.

Badboy Goldsmith made his 28 million euro fortune after selling his stake in an IT recruitment business he founded.

His four-bedroom villa is situated in Cala Jondal, at the southern end of the Balearic Isle.

Surrounded by woodland, it features a white grand piano, 52” TV and a mosaic reproduction of the Mona Lisa, as well as a jukebox and games room.

Its outside wall is daubed with a large gold ‘GG’ logo, representing his initials, which also appears as a tattoo on his bicep.

Goldsmith has kept a low profile since his niece’s wedding was announced, giving up the booze and growing his hair back.
He is now living back in London having apparently come in from the cold to be accepted once again into the Middleton family fold.

QUEENS OF BLING: Move over Kanye West, Spain and UK’s royal families’ jewellery put you in the shade