SINGERS from the University of Southern Maine in the States will be hitting the high notes during a series of concerts across Andalucia.

The tour will take in venues in Ronda, Sevilla, Osuna, Cordoba, Granada and Malaga (full details below).

The musicians of the USM Chamber Singers represent the most outstanding singers at the University of Southern Maine. Chosen through a careful audition process and committed to choral excellence.

The Chamber Singers have performed a diverse repertory centred on a cappella literature of the Renaissance era and the twentieth century and music of various world cultures.

In May 1999 the ensemble toured Europe, singing in some of the most beautiful churches of western Europe, including a performance at Notre Dame in Paris and service music for Sunday Mass at the Karlskirche in Vienna.

The singers received wide acclaim in April 2000 for a performance of the music of Rodgers and Hammerstein with the Portland Symphony Orchestra.

The ensemble toured Ireland, Wales, and England in May 2002 and in May 2005 completed their third European tour—a trip which took them to Salzburg, Venice, and Provence, including a Sunday Mass performance at St. Mark’s Basilica in Venice.

The choir’s director Robert Russell is professor of music at the University of Southern Maine and music director of Portland’s Choral Art Society. 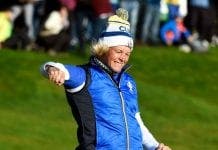 Expat and Marbella resident returns to golf after two years maternity leave, dramatically wins the Solheim Cup with the last putt, then retires