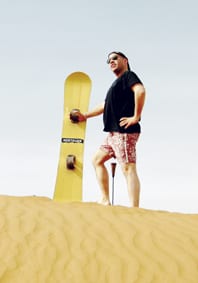 IT was sitting on the sand dune, looking south over the endless sands of the Sahara, that I finally ‘got’ why people come to the desert.

From my sandy perch near Erg Chigaga, the largest dune in Morocco and only an hour from the border with Algeria, hundreds of smaller dunes stretched to the horizon. The silence was total.

The only sound that I could hear was the blood pumping in my ears and my breathing, a little heavy after my climb up the newly christened ‘Dune GB’.

This is why people come to the desert, I mused. This is why so many of the great religions talk about periods in the wilderness. So their followers can find themselves. The solitude. The silence. To look deeply into themselves. Simply, as Hamlet would put it, ‘To be’.

But then I paused from my revery, turned my baseball cap backwards, adjusted my straps and with an ungainly bunny hop, thundered uncontrolably down the side of Dune GB on a snowboard. Dinner at Camp was waiting and I wanted to be on time.

I was on the edge of the Sahara as the guest of two old friends Nick Garsten  and Diane Taylor of Desert Camp Morocco.

Both accomplished travellers, the couple had sold their hotel in Cape Town and were looking at setting up a riad in Marrakech as a new adventure.

All that changed when Diane met Mohamed  – whose nickname is Bobo – trekking in the Atlas Mountains.

Bobo told Diane about the dunes of Erg Chigaga and the backpacker camps in the area and Diane came up with her own unique concept: a luxury upmarket camp in the desert.

You will, of course, be familiar with the old travellers’ adage that ‘getting there is half the fun’.

Well with any trip that involves Morocco, getting there is all the fun.

To describe the adventures that befell photographer Kevin and myself on the first part of our journey would take an extra couple of articles.

The shortened tale involves avoiding a car crashing outside Algeciras, cancelled ferries in Tarifa, torrential rain, catching the last ferry to Ceuta, crossing the border into Morocco in scenes from a Terry Gilliam movie, a terrifying 90 minute cab ride from Ceuta to Tangier courtesy of the Maghreb’s answer to Fernando Alonso, rocking up at the Gare du Tanger to be told that the sleeping compartmet had been derailed, a 10-hour overnight train to Marrakech in a compartment with no door or heating.

Yes, and then there was the teenager next to me playing a mixture of Lady Gaga and French rap on her mobile. Oh dear.

It would be somewhat of an understatement to say that we were relieved to arrive in Marrakech, although even that wasn’t without its problems. Events were unfolding in Cairo and neighbouring Tunisia, and we had been warned to ‘look out for riots and general unrest in the city’. Hmmmm.

Although if you have ever driven through Marrakech, you’ll soon realise that general unrest is the normal order of things.

Our home for the night was the Zamzam Riad, located in the middle of the Medina and run by English couple Marcus and Emma.

Named after a source of water that the Prophet Mohamed found the Zamzam really is an oasis away from the hustle and bustle of the medina. The heated plunge pool, library with fireplace, a rooftop spa with traditional hamman and views over the medina to the minarets made all the difference.

With atmospheric lighting and a beautiful central courtyard with a large palm, Zamzam is very romantic, but alas I was sharing my twin room with Kev.

No stay in Marrakech would be complete without a guided tour of the medina, and for two hours he led us through the maze-like streets, pointing out hidden gems such as the Museum Dar Bellarj, a private house once owned by a Swiss expat and now bequeathed to Marrakech as a women’s arts centre.

Be warned – the medina is an assault on the senses with noise, colour, bustle and an underlying faint smell of dung and urine.

In fact, the medina hasn’t changed that much since it was established in the tenth century around the same time that William the Conquerer was preparing to invade England.

You mostly get the feeling that you are an extra in a Monty Python Movie, particularly as we finished the tour at the famous bustling Djemaa-el-Fna square when Ibrahim left us with this pearl of wisdom. “You know the best thing about this 17-year-old hooker that is bringing down Berlusconi? She’s from Morocco!” he beamed proudly and then wandered off into the teeming crowd.

How tragically sad that just a couple of weeks later this fabulous square – probably the key tourist magnet in Morocco – should be bombed by some random loony. Thankfully, at least, it was a one off, never having happened before and, let’s pray never again. 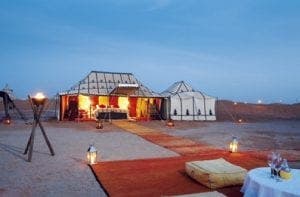 Dinner that evening was at the Casino du Marrakech – if you fancy great food and a night at the tables I would recommend it (and they filmed Sex and the City 2 in the adjacent hotel)  but we had an early start the next morning and so Kev dragged me away before I could do myself too much damage in the poker room.

At five the next morning I was woken by the call from the muezzin, calling the faithful for prayer. The crisp clear sound on the predawn air across the city stripped back the centuries, and I could have been standing in the medina hundreds of years ago, was it not for the air-conditioned 4×4 waiting to take us to Chigaga.

If you were looking for a Berber version of Bob Marley, then Bobo would certainly fit the bill

The thought of a nine-hour drive south east of Marrakech might fill you full of dread (the same as driving from Marbella to Barcelona) but that’s without factoring in the fantastic scenery that you encounter on the way.

The journey to the camp is a film location manager’s wet dream and takes you climbing up through the magnificent Atlas Mountains, where the villages dotted on the hillsides remind you strongly of the pueblos blancos in Andalucia.

This really is Wild West territory and the route through the fertile Draa Valley with its palms and kasbahs is stunning.

We took stop over for lunch at the Dar Qamar, a guesthouse with a pool run by a French couple that Brad Pitt and Cate Blanchet stayed in when they filmed Babel.

We stopped to swap to a new car, a pickup, which was loaded up with supplies. Our driver introduced himself as Bobo’s brother, and after a mint tea we were off into the desert.

Half way through the trip we stopped for more mint tea in a cafe located in a dry lake. “I don’t speed over the lake” he explained. “ A couple of years ago four tourists were killed racing their jeeps across here when they collided and rolled.”

Soon we were among the dunes, skirting the hulking shape of Chigaga and then we pulled up at the camp. It was spectacular. Rather than tents, our sleeping quarters were more like comfortable and stylish mini marquees, with an ensuite bathing tent (if you were wondering about such things each bathing tent has an antique wash basin, ‘desert shower’ and hand-painted chemical toilet)

And then we met Bobo – without doubt the coolest Berber on the planet – who greeted us with perfect English.

If you were looking for a Berber version of Bob Marley, then Bobo would certainly fit the bill. An accomplished musician, Bobo runs the camp with an efficient charm (a charm that was evident when he introduced us to his young Belgian girlfriend later in our stay).

One of the things that had bothered me when I arrived at the camp was ‘what on Earth am I going to do?’

Well, if you are looking for activities then there is chess, backgammon and scrabble, as well as a well-stocked bar – sadly no longer my cup of tea – in the lounge tent.

If you are feeling more energetic then you can take a camel trek, head out to an oasis for lunch, go cross country in the jeep, or try dune boarding.

But what you’ll find yourself doing at the camp is just enjoying the feeling of being in a totally different environment.

That night I sat by an open fire, eating a tasty tangine and bread that had been cooked in the sand by Bobo’s cousin while he sang and drummed by candlelight. The stars hung impossibly large over my head and the moon was incredibly bright. And when I went for a silent moonlit walk back to ‘my’ dune later that evening, I wouldn’t have been anywhere else in the world.