JAMES BRYCE takes a trip to Chiclana and Sancti Petri, where it is said that the Temple of Hercules once stood and Roman leaders Hannibal and Caesar took their holidays

I COULD hear it long before I could see it.

What started as a distant unidentifiable murmur became a sudden burst of noise as I rounded a corner, like the transition from muffled music heard underwater to the clarity that comes as you break the surface.

The scene that greeted me resembled the culinary equivalent of a trading floor as stallholders responded to gestures and requests from customers, who in turn jostled for position at the counters.

The variety of produce on offer was astounding.

Colourful mountains of fruit and vegetables, of all shapes and sizes, contrasted with the more muted tones of the cheeses, meats and breads.

And then there was the seafood.

Shrimp, crab and shellfish lay invitingly on their icy displays as a fishmonger expertly carved fillets from a large tuna.

There was so much fantastic fresh produce to choose from that my only regret was the effect my hearty breakfast had had on my appetite.

Chiclana de la Frontera’s covered market, situated in the central plaza, is the heartbeat of the town – a focal point for locals looking to stock up on grocery supplies and gossip in equal measure. 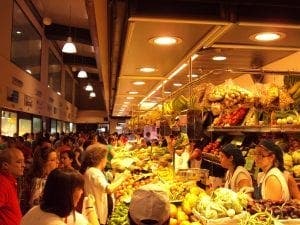 The town, divided by the River Iro, is dotted with pleasant squares and charming churches all linked together by a modest network of shopping streets.

Located about 40km south of Cadiz, Chiclana also boasts up to 20 bodegas, offering sherry tastings to tourists and the opportunity to treat yourself to a nice bottle of moscatel.

Instead, I dropped into a tapas bar for a hard-earned beer and was given an instant reminder of the town’s links to the high seas.

The walls were adorned with black and white photographs dating back to the 1920s.

In one, a crowd of locals watched on as fishermen hauled the carcass of a huge whale onto the quayside, while other images showed fishermen chatting as they tended their nets.

Separated from the coast by six kilometres of tidal salt flats, Chiclana has close ties with the ocean.

The almadraba fishing technique used to catch tuna is famous along this stretch of the Spanish coast and at one time fishermen using this method would head out into the Atlantic from the thriving nearby village of Sancti Petri.

Sadly the village is now abandoned, sitting largely in ruins, with long-forgotten fishing boats serving as a poignant reminder of its seafaring past.

It is claimed that Franco commandeered the village as a holiday retreat for his family while he was in power, forcing the villagers out.

It then fell into disrepair following the dictator’s death, although there is talk of some villagers moving back to Sancti Petri to renovate properties in the settlement.

As I wandered around the nearby modern marina beyond the village, I was reassured to see that the area still has a strong maritime theme running through it.

A large number of boats were moored, accompanied by the occasional clanking sound of metal clasps knocking against the masts in the breeze, while a handful of anglers sat patiently by their lines.

A small selection of restaurants and sailing clubs attended to the lunch crowd, alongside companies operating out of portacabins offering a variety of water sports. 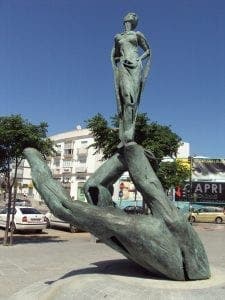 The levante winds, which are a regular fixture on this stretch of coast, make it the ideal spot for sailing sports, and a cursory glance out to sea indicated there were no shortage of people taking full advantage.

For the slightly less energetic, boat trips run twice daily to the Castle of Sancti Petri, located on an island just off shore.

The island is situated at the mouth of the Sancti Petri channel between San Fernando and Chiclana and is steeped in history.

Legend has it that the island was once home to the Temple of Hercules, widely regarded as one of the most important religious buildings in the Ancient World.

Roman historians claimed that the remains of the mythical God were buried beneath the temple and Hercules’ legacy is acknowledged today in the form of a street name and an imposing statue located at the entrance to the marina.

Classical sources claim the famed Carthaginian military commander, Hannibal, came to the island to offer sacrifices to Hercules before embarking upon his conquest of Roman Italy.

Meanwhile, Julius Caesar is said to have had a dream which foretold his domination of the world while staying at the castle.

My immediate plans were slightly less ambitious, involving a stroll along the two-kilometre stretch of beach that looks out across the channel towards the island.

I was staying at Casa la Dehesa, an ‘off-grid’ eco-retreat about 15 kilometres inland from Chiclana. Owners Rob Kite, 44 and Flavia Aravena, 46, who rely on solar power for their electricity supply and grow their own vegetables, have lived near Chiclana since 2006.

“The most attractive thing about the area is that it is not over-developed and is quite Spanish,” Flavia told me as we enjoyed the late evening sunshine at the retreat, bordered on one side by a cork forest.

“It allows us to enjoy a great quality of life and the atmosphere is very relaxed,” Rob added.

In the evenings, the emphasis shifts from the centre of Chiclana to the nearby beach front promenade of La Barrosa.

The beach attracts plenty of sun worshippers during the day and was recently voted by the Sunday Times as one of the top five best beaches in Spain.

But as day becomes night the bars and restaurants come alive with families and couples alike, drawn in by the promise of fantastic sunsets and seafood.

As I tucked into a variety of dishes including octopus and tuna, against a backdrop of excitable chatter, it was easy to see why the area is so popular with Spaniards.

And as I sat there listening to the waves despite not being able to see them, I was reminded of my earlier discovery of the market.

Chiclana may be a town that is slow to reveal itself, but those who take the time to explore it will find a diverse and enjoyable stop off along the Costa de la Luz.