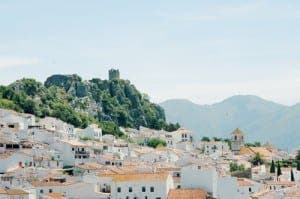 IT has a special ‘zing’ that the other villages just haven’t got,” explains Caroline Grant from Hampshire, who is currently looking to buy a home in one of Andalucia’s most scenic towns.

“It is not spoilt, there aren’t coach loads of tourists, and we just love it,” she added.

Gaucin does have a certain je ne sais quoi about it that sets it apart from the many other white villages that litter the mountains across Andalucia.

Known as the Balcony of the Serrania de Ronda, Gaucin perches on a rocky outcrop at the end of the Genal Valley.

The town is in fact just 30 minutes from the Costa del Sol but this piece of unspoilt countryside offers a raw beauty that is a million miles away in spirit.

Small enough to remain untroubled by supermarket chains, this jumble of whitewashed houses, lorded over by the historic Arabic castle Castillo del Aguila, is the biggest of the valleys pueblos blancos with around 2,000 residents.

But it has none of the razzle-dazzle that has taken over the concrete ribbon of the Costa del Sol.

And, while it is difficult to put your finger on exactly what it is that makes it such a magical place, it is clearly something that has been felt by many.

Despite initial appearances, hidden in this mountainous enclave behind the white washed walls are literally hundreds of expats.

In particular, Gaucin attracts a bohemian and artistic crowd that lends it a distinctly creative and prosperous air.

It is rapidly carving a name as an artist’s escape while also being a select holiday spot for the likes of the Sainsbury family, Fatboy Slim and allegedly once Princess Diana.

But its key selling point is the spectacular views.

The furthest point inland where you can still see the sea, on a clear morning you can make out both Gibraltar and Morocco’s Rif mountains beyond.

In fact artist Paddy Robinson, 66, who has lived in Gaucin for eight years, believes it is some of the best scenery in Spain. 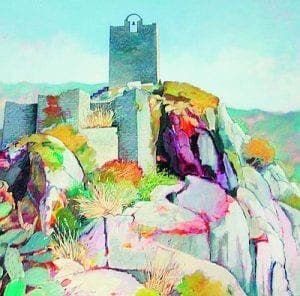 “I decided to come and live in Spain but I had never been here before I drove down from Barcelona with a friend looking for somewhere and I didn’t like the scenery until I got here,” explains Robinson who exhibits her work in Fructosa.

“It is just beautiful,” she added.

Even the locals still admire the views.

But as we got chatting – taking a few minutes out from watching the world go by – the old boys all agreed it is the scenery that draws the foreign crowds.

“Gaucin has beautiful views of the countryside and Gibraltar.

“We will never leave, we have grown up here, and it is our town.” Of course, as might have been expected the trio also launched into a spiel about the good old days.

Throughout the town’s somewhat turbulent history – which according to archaeological remains dates back to pre-historic times – Gaucin has been invaded by everyone from the Phoenicians to the Moors to the French.

And key to Gaucins early popularity with the British is of course Gibraltar.

From the late 18th century Britons commissioned on the rock would spend summer breaks here.

And it became so popular that British engineers were actually commissioned to build a railway from Algeciras to Ronda in the late 19th century.

Sadly, on the opposite side of the coin, as Gaucin has seen more and more foreigners arriving, it has seen local Spaniards leaving.

“Around 100 years ago, Gaucin was as large as Ronda,” explained David Rodriguez Delahuerga, 33, who owns hotel La Herriza, on the road down to Gaucin estacion.

“Basically over time there was less and less demand for the local produce, which is predominately goats and sheep, and so a lot of people left, they went to big cities like Barcelona and Madrid to find work.

“Interesting now however there are a lot of people around Spain who originated from Gaucin.

“And although Gaucin is bigger than some of the other towns in the area, a lot of the houses are empty, owned by people who have their roots here but only come back for holidays.” He continued: “Now however the foreigners are bringing money with them which is great for the town.

“But it still doesn’t feel like a touristy place.

“It is still a typical pueblo blanco in a beautiful natural park, (Los Alcornocales), and has everything people look for in an original Andaluz village. It also has that little bit more.”

Instantly setting it aside from a typical village, for example, are dozens of brightly-coloured geckos which stand out against the whitewashed walls as part of a local artists initiative.

The brainchild of Jesus Balsa, the 2008 project – which saw 400 geckos decorated – aimed to involve locals and foreigners, young and old, in promoting the village.

By following the geckos around you get a wonderful flavour of this exciting and pretty white village.

You are also reminded of the strong artistic presence that comes to the fore in the annual art trail.

Transforming the town into a living gallery the Art Gaucin Open Studios event each Spring lead visitors on an art route throughout the many workshops.

Now in its seventh year, the event lets visitors wander from studio to studio, mingle with the artists and soak up the creativity.

And creativity is certainly part of the fabric of life in Gaucin, and is, quite possibly, the secret to the town’s ‘zing’.