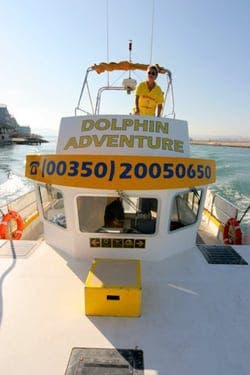 ALTHOUGH I don’t live too far away from Gibraltar, I still don’t visit that often. But something’s changed and now I want to go every day! It’s not a new fashion boutique or trendy winebar; it’s not a new job or harbour front apartment; it’s not even a dishy customs official…

Just before my sister and her husband arrived to stay with us, I saw a special voucher promotion for Dolphin Adventure based in Ocean Village and thought it would be a bit of fun for an afternoon. To be honest, we would never have thought about going if I hadn’t seen the voucher, but I’m so glad we did!

When I spoke to one of the owners of the dolphin safari company, Angie, to arrange our “adventure”, she recommended we join one of the later trips during the afternoon for the best chance of spotting the dolphins.

Their boat, Dolphin Adventurer, is actually a custom-built catamaran with twin hulls, which not only means that it is super steady and doesn’t roll around in the water (sister and I were dreading that) but also that it has a huge, open deck so that you can walk around easily and watch the dolphins whether they are behind you, in front of you, or to the side. Brother-in-law was thrilled about this and clambered from side to side with his brand new and very long camera lens looking quite the pro photographer! Sister and I happily planted ourselves on the front deck, ideal for catching some rays while keeping half an eye out for dolphins! Dolphin Adventurer is also very safe having been equipped with all sorts of gadgets – we were even given an airline type safety demonstration which I’m not sure I’ve ever had on a pleasure boat ride before.

We were incredibly lucky to be the only customers on the 5pm sailing so, to us, it felt more like a private charter than a group excursion. Angie steered the boat while holding up her binoculars to watch out for dolphins (multitasking like only a woman could) while her colleague Georgia explained a bit of background on the geographical area and shared with us some of her knowledge about dolphins, how to identify them, their feeding habits and so on.

Apparently dolphins are attracted to the Bay of Algeciras because of the deep, clean and nutrient rich water which provides them with a constant supply of good quality food. They spend much of their time chasing after, and snacking on sardines, mackerel, flying fish and squid, slapping the water with their tales to crowd their prey into one area; and feeding time is best for seeing large numbers of dolphins together – that’s what we were hoping anyway!

In reality, I had expected to see a few dolphins swimming around in the distance, perhaps leaping out of the water if we were lucky. But I was absolutely gobsmacked (no other word for it, I’m afraid) when they began to swim around and under the boat, surfing in the waves ahead and the wake behind, flirting with us (in the case of Billy the Bottlenose) and honestly seeming to enjoy entertaining us, as much as we enjoyed watching them.

All but one of the dolphins we saw were Common Dolphins, except for Billy the Bottlenose. Generally, these different species of dolphin don’t mix, especially as the larger Bottlenose variety can be a bit aggressive and usually stay further out in the Strait. But Billy seems to have become separated from his pod in 2006 when he was a youngster, and been adopted by the Common and Striped Dolphins that reside in the Bay. He’s a definite showman and rather attached to our guide Georgia. I swear he winked at her at least twice!

I’ve been on other dolphin trips on bigger boats where I’ve watched the dolphins swim around the boat in the Strait of Gibraltar, but from quite a distance and definitely not in such huge numbers as we saw in the Bay of Algeciras. My sister and her husband have been lucky enough to see wild dolphins swimming around New Zealand and Australia. But we all agreed that we had never experienced such “intimacy” with wild dolphins, or seen so many swimming together, in their natural environment, all in one place.

Without a doubt, the Gibraltar dolphins rock!

Can I go again tomorrow? 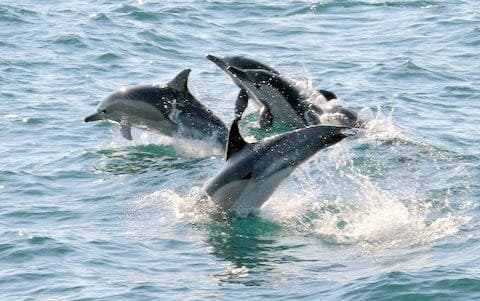