‘YOU are exceptionally good people.’ So ends a note, beautifully written and poignant, in the visitor book at the reception of Cudeca, Spain’s only independent cancer hospice.

It is just one of thousands of tributes left over 20 years by those whose loved ones have received help here during their last few days.

As soon as I walk through the doors, I feel deeply inspired by the welcoming, warm and accepting atmosphere of the hospice in Benalmadena that provides care for terminally-ill patients throughout Malaga province.

With its homely bright colours, tasteful decoration, comfortable chairs and sunny garden – decidedly non-clinical – it’s immediately obvious how it makes a positive difference to the end of people’s lives, and those who love them.

And with an average turnaround for a patient from when they first contact the hospice to the end of their life at just 34 days, it is obvious time is of paramount importance at Cudeca.

To start with, although 85 per cent of the patients are Spanish, all staff who come into contact with them are bilingual in Spanish and English, as is all literature.

This means the hospice is just as much a blessing for the expat community as it is for Spaniards.

Holistic in its approach, it combines not only physical factors, but also the emotional, psychological, social and spiritual experiences that patients – and their families – might be having. 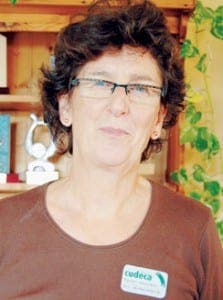 “We care for both the patient and the family,” explains nursing director Susan Hannam (pictured left). “Everyone needs a lot of support and information.”

This is why the Cudeca team is comprised of experts including nurses, doctors, psychologists, social workers and counsellors.

As Susan explains, sometimes patients and their familes are simply at a loss to know what to do when they receive the sad news that the illness is terminal, and that nothing more can be done.

And that is where Cudeca steps in.

“There’s always something you can do,” explains the Englishwoman, who has worked for Cudeca for nearly two decades. “Just being there. Having somebody who knows what they’re doing, saying, ‘How are things? What is the problem? Let’s do this together’”.

Such is the expertise at Cudeca – now well known internationally for its care, research and training – that it is often dealing with highly intricate situations, sometimes even having to gauge whether a patient should be told about their condition.

This may come as a surprise to expat readers, for whom discussing such things openly has been standard for decades.

“With our Spanish patients, a lot of them don’t actually know their diagnosis,” says Susan. “It’s a cultural thing. It’s to protect them, to not worry them.

“They don’t know they’re coming to the end. They have a big suspicion that things are not going right, but they don’t necessarily know.

“Things are changing now. The law has changed, and people have the right to know. Before, they often just told the family.

“We know when somebody wants to know. Some people don’t. And they are in their right not to know. We have the training to know instinctively what the patient needs.”

It is certainly nothing short of amazing what is available.

At the day-care centre, patients can come and have breakfast, socialise and enjoy complementary therapies such as Reiki, massage and reflexology. They may want to have their hair cut, do some artwork or take a candlelit bath in a room that is specially designed for those who can no longer bathe easily at home.

There are even parties and daytrips organised by the charity. “We went to the beach this summer and one patient had a dip in the sea for the first time in 15 years. It was wonderful to watch,” says Susan.

While most of the 170 patients being treated at any one time are cared for at home, there are also nine bedrooms in the centre’s in-patient unit for those who need them.

It may be that they have complex physical or emotional situations that need continuous professional care, or perhaps it is just that their usual carers need a bit of a break.

The most touching element of these spacious rooms – six of which are for double use – is that they allow beds to be wheeled outside onto a private terrace so that patients can feel the sunshine on their skin, even when their health does not allow them to do much else.

Beyond the terrace lies a tranquil garden and, in the distance, a spectacular view of the Mediterranean Sea.

The crux though is that Cudeca is funded almost entirely on donations, with just 10 per cent coming from the government plus a small amount from savings banks such as La Caixa and Caja Madrid.This finances some of the workers’ salaries and cars.

However, as Susan points out, this financial help is anything but secure.

“The whole economic climate has changed so much that even the savings banks can’t provide us with what they used to, ” she says. “The same with other small grants we get. Everything from the Junta and local town halls has been stopped. They’ve got no money.

“We rely very much on donations.”

In order for the charity to carry on, fundraising from the public is vital

Indeed, as well as salaried staff such as nurses, the charity is very much dependent on the 600 volunteers giving their free time – be it to drive them from their homes to the day-care centre, serve food or carry out aromatherapy.

Volunteers like 62-year-old Liz Smart, who gives up two mornings a week to help out at the Cudeca charity shop in Arroyo de la Miel.

“I’ve worked here over eight years now,” says Liz, who started to help out after both her mother and a friend died of ovarian cancer within a year.

“I really enjoy it. It’s good to do something useful. They’re all nice ladies here and I like the social life you get with it,” she says.

But in order for the charity to carry on, fundraising from members of the public continues to be vital.

The money raised by TRE’s annual telethon – this year with the Olive Press acting as official sponsors – is so valuable to the hospice.

Not only does Cudeca cost 2.1 million euros a year to run, it also wishes to expand, carrying out more research and training and increasing its facilities for children.

“The participation of the listeners and the fabulous comments and donations they give at the telethon are wonderful,” explains Cudeca founder Joan Hunt, who was installed firmly at Number Four in the Olive Press’ annual Expat 100 poll earlier this year.

“The radio station gives up a whole day for us. It is a very inspiring day’s listening. And thanks to the Olive Press and its readers for supporting us so much this year.

“As the founder of Cudeca it’s always a bit emotional for me to hear so many nice comments.

“And it’s really good for our nurses because they work so hard and yet they can’t cure people. It’s nice for them to have something so positive and to hear people’s lovely comments.”

Bidding has now started for the 100-odd prizes being auctioned this Friday December 2.

Road to an OBE

Cudeca was born after Joan Hunt’s husband Fred died of cancer at the Red Cross Hospital in Malaga in 1992.
While Joan wanted to care for Fred at home, the palliative care facilities available were sadly not sufficent.
“I didn’t want anybody to go through what I did,” says Joan, who ran various businesses back in the UK.
She knew about hospices in the UK and along with nurse Susan Hannam and doctor Marisa Martin – who had cared for Fred before he died – she set about starting a hospice along the British lines.
The charity grew and since the start has cared for over 6,000 patients and their families.
Joan has received numerous awards in recognition for her work, and was even given an OBE ‘Order of the British Empire’ award in 2002.