SOME people think me a little crazy about my pooch. Admittedly, I have been known to liquidize liver to make healthy dog treats (never again) and for Bailey’s sixth birthday I baked peanut butter and grated apple birthday cupcakes.

But this all paled into insignificance when my other half told me he had been booked to DJ at a dog’s birthday party being held in the Wave Christian Church, Puerto Banús, I thought he was joking. Only in Marbella!

Organiser, Ruth Shillinglaw, had come up with the idea to celebrate her dog Silvie’s second birthday while raising some much needed funds for ADANA (Association for the Rights of Abandoned Animals). Bailey and I decided to go along and check it out, and make sure that “Daddy” wasn’t getting too friendly with any of the other dogs!

Now, for those not in the know, Bailey is rather a large labrador. But as we approached the church, he decided it was all looking a bit too intimidating and the brakes went on. It must have been all those little dogs with their gladrags on and in the mood to party. My normally fantastically behaved faithful friend was being decidedly uncooperative! Embarrassingly, one of the organisers found this so amusing that he went inside and told everyone – the DJ knew exactly who that scaredy dog was! 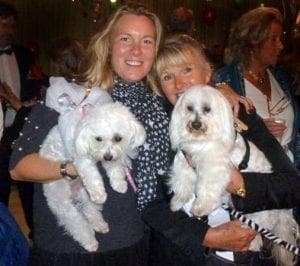 After quite a lot of persuasion, I got my daft dog in and although he jittered and jived most of the evening, he did eventually settle down. But what a party!

While cocktails, food platters and even jewellery were on display for the two legged invitees to buy, the evening really was all about the dogs. A specialist groomer demonstrated clipping a very patient black poodle while all the other dogs milled around getting to know each other. Food and water bowls were dotted around the room plus some nommy dog biscuits which had been cleverly hidden in various nooks and corners.

Bailey was given a number 17 tag to wear around his collar so that he could enter the pageant, and we were so proud when he walked up the red carpet “dogwalk” to collect his prize for the floppiest ears. All the dogs were remarkably well behaved as their humans chatted and enjoyed the entirely dog related music. Rob DJ did well to find so many appropriate songs and even played a few requests – Curiosity Killed the Cat was a particular favourite with one dog and Bailey’s number one, Who Let the Dogs Out, was a popular choice.

There were some great raffle prizes and gorgeous dog accessories for sale (I wasn’t allowed to buy Bails a diamante collar – not man enough apparently). All food and drink was paid for on a donation basis and the other sellers donated a percentage of their takings to the charity.

First reports were that all the dogs and their owners had raised an amazing €500 for ADANA so big congratulations to Ruth and Silvie the dog for organising such a fun event.

Please don’t forget the ADANA Christmas Fair being held on 18th December at the Palacio de Congresos in Estepona from 11am to 4pm. There will be a wide variety of ADANA and commercial stalls with bar, cafe, mulled wine, bacon sarnies, hog roast etc., as well as entertainment including bouncy castle, Father Christmas, face painting, singers and dancers. Anyone interested in having a stall, helping or donating a homemade cake should contact Marjorie on marjoriebed@yahoo.co.uk.