THE 16th of December and the opening of the exhibition of work by the Asociación de Belenistas de Pamplona, an association of nativity scene artists who have been creating and competing for over 60 years, brought a little traditional Christmas to the already prematurely lit up city. 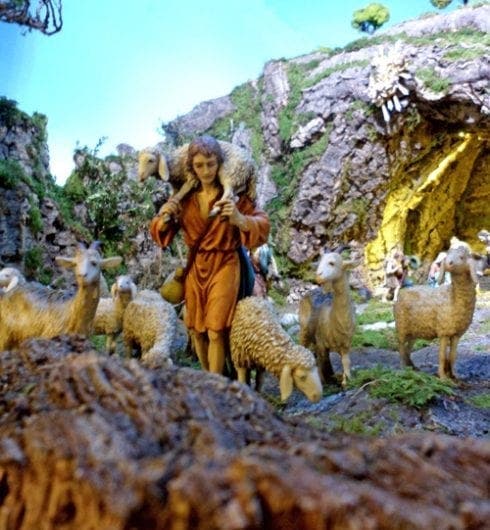 The setting of the exhibition is the Palacio de Baluarte, an essentially modernist building, despite the ‘Palace’ title. Its impact is through clean monochrome lines and sharp corners, as well as an effortlessly cool sprinkling of Christmas lights, minimalist and chic. Yet inside it is hosting the much loved exhibition of belenes (nativity scenes) that is warm and cosy, like putting your feet up by the fire and eating Christmas pudding. These little scenes of the birth of Jesus are rustic and incredibly, well, sweet. Artists work on them throughout the year producing models that are convincing and deeply intricate, yet not at all elaborate. They come bearing a humble sentiment that is being lost from our modern Christmas, or so say the exasperated Coca cola critics.

The magic is in the simplicity. There are figures doing various traditional crafts, shoemakers threading sandals or carpenters shaping wood. There are camels and donkeys, and of course flocks of sheep. A shepherd with one of his tired lambs flung around his neck was a common occurrence. Moss adorns the scene and complements the realism of the art while the buildings are understated in simple peachy colours. Excited children, still enchanted by the tradition, pointed and exclaimed over the little scenes, their eyes sparkling at the sight of these lifelike people and the specialness of their annual trip to see the belenes.

At the exhibition, a father commented that Christmas is a confusing time for his children as there are so many different influences and characters that control their festive season. There’s the choice between the Three Wise Men, an all-American Santa Claus, or the regional Olentzero. The latter is a Basque character of legend. He is reminiscent of Father Christmas as an portly old man with a beard who comes down from the Basque mountains and gives presents to children. Oh, and his daily job is making charcoal so he gives this to naughty children as well. Apparently some households celebrate all three. I can not even begin to imagine the hyperactivity my younger brother had for Father Christmas, and my hungover anger at him for waking me up at four in the morning on the 25th, but three times over.

On leaving the Palacio de Baluarte, the stark contrast between inside and out hit me as hard as the bitter cold rain. The falling snowflake lights and the palace’s inspired but less-than-traditional Christmas tree made entirely out of green wine bottles would have been just as impacting before, but suddenly I’m humbled.