AS I climb up the gangplank into the Akademik Ioffe, an icebreaking surveillance ship used during the Cold War, I wonder what has lured me away from the sunny mountains of Andalucia in winter to this forbidding, ice cold continent.

Perhaps it was the ‘call of the little voices’ which was how Frank Wild, the great Polar explorer, explained what compelled him to return so many times to the remote, but incredibly beautiful, wilderness of the Antarctic.

Accompanying us on this journey is Alexandra Shackleton, the only granddaughter of Sir Ernest Shackleton, the great British explorer who in 1914 set sail in ‘The Endurance’ to attempt to cross the Antarctic via the South Pole.

However, due to unusually bad weather, the ship became trapped in ice before breaking up and sinking, which led to one of the most epic adventures in modern history.

The men had to abandon ship, shoot their dogs and remained stranded on the ice for six months before finally taking to three small life boats and reaching the comparative safety of Elephant Island where they arrived soaked and, reportedly, demented. 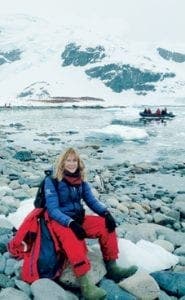 It was here that the unsung her Wild exhibited his immense strength when his trusting boss Shackleton left him in command of 21 desperate men, while he went for help.

The men somehow managed to survive on seaweed, seals and penguin meat for four-and a-half-months until Shackleton finally returned on a rescue boat.

We are here to commemorate this little-known feat of survival and five of Wild’s Australian relatives have joined us on the ship along with a BBC documentary crew.

I share a cabin with my childhood friend from South Africa, Angie Butler, and a small pine casket containing Wild’s ashes.

Angie has spent the last seven years researching Wild’s final years in South Africa, where he was unfairly reputed to have died a lonely, impoverished alcoholic.

It is far from the truth and in her book The Quest for Frank Wild, she describes tracking down Wild’s ashes in a forgotten vault in a crematorium in Johannesburg.

The purpose of this journey is to return his ashes to South Georgia, to be placed next to his close friend and ‘boss’, Shackleton.

This was always Wild’s wish but due to the outbreak of war it was never fulfilled.

Wild joined five expeditions to the Antarctic, with Shackleton saying of him: ‘He is my second self. I love him. He has been a tower of strength to me’.

The ceremony, conducted by the rector of the Falkland Islands, takes place in the small Norwegian whaling station of Grytviken on South Georgia, in a simple wooden church.

Beneath the crying of gulls and the ship’s foghorn, I follow the small procession past the world’s most southerly post office and between rusting whaling boats.

We have to dodge aggressive fur seals and basking elephant seals, to the simple picket-fenced graveyard where Shackleton’s tall tombstone looks proudly across the bay.

Here, appropriately, Wild’s great niece finally lays the ashes, with a tombstone facing the same way across the bay as his former boss’. It is a moving and historic moment, a fascinating twist in the final chapter of the Heroic Age of polar exploration. 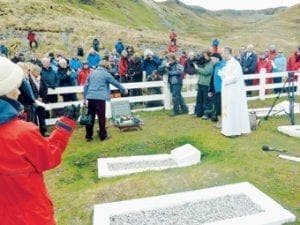 As the ship cracks its way through the frozen sea we spot our first humpback whale against tumbling white glaciers and beaches crowded with penguins and seals.

Summer is the time to be here, when it’s possible to hike up glaciers between huge colonies of penguins and seals or kayak between icebergs.

Heading back towards the southernmost tip of Argentina across the dreaded Drake’s Passage I feel privileged to have journeyed to this delicate, indescribably beautiful continent and am reminded of our responsibility and duty in preserving this fragile wilderness.