TO avoid being eaten alive by mosquitoes, you need to keep your feet clean.

Scientists in the Netherlands have discovered that mosquitoes – which carry the deadly malaria disease – actually love smelly feet.

The discovery comes after researchers sampled sweat from the feet of 48 male volunteers aged 20 to 64 who were told to wear special nylon socks for 24 hours before sampling.

In a series of experiments, they then tested the attractiveness of different samples to mosquitoes from Liberia, where malaria is endemic.

It emerged that mosquitoes were far more attracted to feet with high levels of staphylococcus bacteria.

However, samples from people carrying a more diverse range of bacteria were actually less attractive to mosquitoes than others with large numbers of specific types.

The findings, published in the online journal Public Library of Science, could now lead to new ways of preventing malaria with scientists developing a new trap for mosquitoes using the odour of human feet to lure them in. 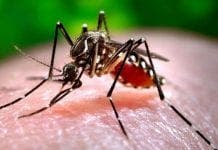 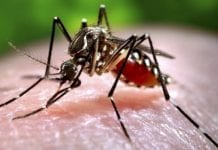 The four types of people mosquitoes love to bite

Mosquito threat to be combated in Spain