Up the hill and down the dale,
I walked the rocky mountain trail;
I saw the plains… I’ve got the pains
To prove it.
My back has spasms, my legs are sore,
But, what is more,
My pants are dry… so that’s not why
I‘m walking like I’ve peed myself.

Orienteering, archery and donkey racing. What an adventure!

On January 22, the Montejaque tourism office organised an 11-kilometre walk from the village of Montejaque to the Refugio de Libar. On arrival, teams of two to five participants had to take part in an orienteering search for markers, an archery contest, and a donkey race to grab a flag off a tree.

Chris Mees, Nancy Heyman, my husband Kevin and I made up a very enthusiastic team … we were, in fact, the first of the walkers to arrive at the Refugio, so we were sitting soaking up the sun and drinking beers as the rest of the participants straggled in.

Organiser Juan explained the rules of the competition – first in Spanish to the mostly local participants, then to we four foreigners (two Belgians, two English. Each team had lengths of ribbon to wear as armbands – our team’s ribbons were yellow, and Nancy immediately burst into song:

“Tie a yellow ribbon ‘round the old oak tree …”

But they weren’t ribbons tied to old oak trees; they were flags … which had to be retrieved on donkey-back. Our orienteering map showed us the location of four markers and four flags. The contest involved finding a marker (which could be hidden in a hollow tree, for example), getting it to Juan as fast as possible, shooting three arrows at an archery target, riding a donkey to grab a flag off a tree, and then returning to the check-point. As soon as we had completed these activities, we had to repeat the process three more times.

We found our first marker in record time, as we all split up in the area where it was located and each started looking into hollow trees. We were the first team to gallop down the hill to Juan, and we then nominated Chris for the archery competition. Wow! He was William Tell … two of his three arrows were in the bull’s-eye. Nancy was picked to ride the donkey to retrieve the flag, and I ran alongside her to encourage ‘Shrek’ (our donkey) and to tug on the rein whenever he seemed reluctant to move on.

Yes! We had completed the first part of the competition, and appeared to be leading the pack.  It took a bit longer for us to find the second marker (hidden up against the back wall of the Refugio) – mainly because we were distracted by the Montejaque Mayor, Diego Sanchéz Sanchéz, who, on his tiptoes, was pulling a flag off a nearby tree.

“You’re supposed to be doing that on a donkey,” we said.

Diego’s team had got a bit confused … they were retrieving flag number 4 instead of marker number 4. How could they make such a mistake? Easily, we discovered, as, five minutes’ later, we were off searching for marker number 3 near the tree that held flag number 3.

“No!” shouted Juan from the checkpoint. “You’re supposed to be looking for the marker, not the flag. Look at the map.”

Oops. We were well off-target, and had to run cross-country and climb a wall to find the third marker (inside a water trough).

After more donkey-riding (Nancy) and running alongside (me), we decided we needed a rest, so the guys went off to find the fourth and last marker. As Chris and Kevin were scouring the hillside, a father and son team came into the checkpoint, cheering and waving their final flag.

Meanwhile, Chris and Kevin did not seem to be having much luck finding that last marker. The winning father and son team were very helpful: “See that little tree and the big rock. It’s there.” So, armed with this information, I ran up the hill to help find it. But that fourth marker still eluded us.

Finally, Juan came up to point it out. Among all the little trees and the big rocks, we’d been looking at the wrong ones.

Chris fired off three more winning arrows, Nancy and I raced the donkey to retrieve the fourth flag, and then we collapsed and celebrated our second place victory. (The other teams, meanwhile, were searching for that fourth marker, and Juan had to help them, too).

After a great lunch (steaks and pork chops grilled over an open fire), it was suggested we walk to the ‘Puerto del Correo’ – the literal translation is ‘Mail Port’, where the villagers of Montejaque and Villaluenga del Rosario used to exchange letters (and smuggled goods?)

“How long will it take?” we queried.

“About an hour, round-trip,” replied Juan.

“Just a short incline; no problem. And it’s worth it.”

Yes, the view from the Puerto del Correo was worth it. But the actual 90-minute round-trip, and the “short incline” (ha!) played merry hell with my legs, bum and back. And we still had the 11 km. to walk back from the Refugio to Montejaque.

Thanks to Chris (10 years’ younger, and much fitter), we had to walk only 7 km., as he ran on ahead, got his car, and came back to pick us up … and also had cans of cold beer to revive us.

Three glasses of wine later, I was feeling much better.

But the next day… Ouch!

I saw Juan at the tourist office, and thanked him for a great afternoon.

“What’s the matter with you?” he asked, as I hobbled towards him.

But it was worth it. 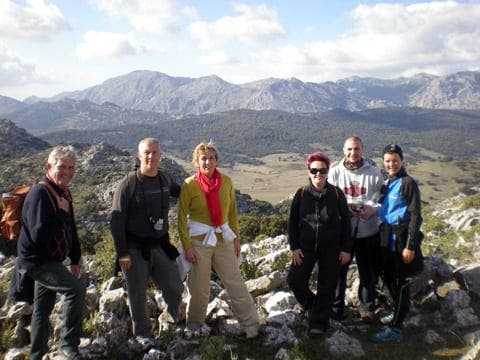 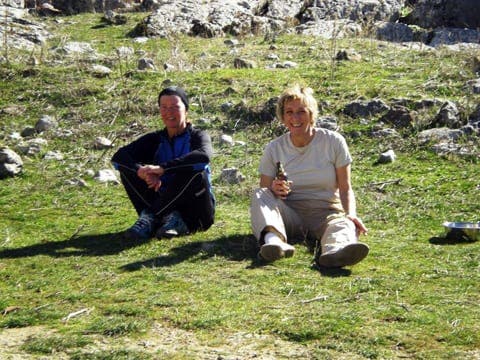