AN American family who had not heard from their Spanish relatives for three decades have finally been reunited with them thanks to an Olive Press appeal.

It came after Oklahoma-based Eva Weston, 36, asked us to trace her aunt Antonia Robles, who her mother Josefa had lost touch with after marrying an American and moving from Sevilla to Texas in 1976.

She had already failed to find her aunt despite taking search trips to Spain and placing an incredible 200 adverts on websites, including Facebook and MySpace.

Amazingly though, her sister’s daughter Maria finally spotted her picture in a copy of the Olive Press in Sevilla, and immediately got in touch.

While overjoyed with the phone call from Spain, tragically they received the news that her mother Antonia had actually died of diabetes five years ago.

“Even though it was bittersweet news, we cannot thank you enough for this gift,” said an emotional Eva.

“It turned out they had both looked everywhere for each other and were heartbroken to be so long apart, particularly as they had grown up together in an orphanage.”

She continued: “They had lost touch when they both moved house in the 1980s and letters went missing or were returned to sender.

“I guess the mail system was so slow back then,” she said. “It was just tragic luck.”

Eva revealed she had even taken a fruitless trip across the Atlantic in 1998 to hunt in Carmona, where both siblings had been brought up in the Sisters of the Cross orphanage.

“I looked in the phone book and called everyone with her surname,” said Eva.

“It turned out my cousin had long since moved to Sevilla.”

Finally Maria, now 42, saw a photo of herself as a child in the Olive Press’s Christmas edition.

“I just came across it and spotted my picture with my mum,” said Maria.

The two families have since been in daily contact, as well as chatting on Skype and will meet later this year.

“Thanks so much for your appeal. It is amazing to be in touch after so much time,” added Eva. 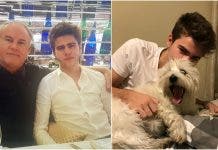