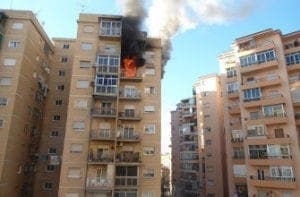 AN expat – known as Nigel Mansell’s lucky mascot – has died in a fire in Granada.

Michael Greenhalgh, a professional racing driver, was struck down in the blaze after an electric heater caught fire.

The Briton, who helped his dad Clive run the racing circuit at Guadix, had been flat-sitting an eighth floor apartment in the Zaidin area.

The multilingual 30-year-old, who normally lived in Lecrin Valley, was found just three metres from the front door after trying to escape.

His father told the Olive Press: “Michael was extremely valiant on the race track.

“He won a lot of races and lived life on the edge. Damon Hill and many Formula One champions have even paid tribute.”

He continued: “He was Nigel Mansell’s lucky mascot as he said Michael looked like ‘a smiling buddha’. He’d buy him a hotdog and drink after a win.”

Originally from the Midlands, Michael had moved to Spain in 1997 with his family.

He is credited with making the Guadix track a success by getting manufacturers like Aston Martin and Porsche  to use it.

He also raced professionally for a number of teams including the Ronda-based Ascari GT3 team, as well as coaching up-and-coming drivers.

He was even also able to find time to help his Taiwanese mum Dao and sister Natasha run Thai Elephant restaurant in Restabal.

“Mike was one of the nicest people I ever had the fortune to meet,” said family friend Adrian Day.