Six brawny men (three dressed as women and one in a chicken suit) won the jug-throwing contest.

Cruella de Vil, accompanied by kids dressed as Dalmatians, won the ‘best-dressed in the carnival’ contest.

The ‘Hello Kitty’ group and a lion-tamer act were definite contenders.

This was Carnaval day in Montejaque.

Saturday, 25 February, 2012 was the date that the mountain village of Montejaque chose to celebrate its annual ‘Carnaval’. The previous weekend had seen the carnival in the neighbouring village of Benoájan, where the winner of the 60€ ‘best-costume’ prize went to Yaiza Hernández Sardiña (the cook at the Hotel Montejaque) for her creative, mobile mother-and-daughter shower cubicles. (Yaiza admitted afterwards that the materials to make the costumes had cost more than the prize money, but it’s the winning that counts). The town of Ronda held its seven-day carnival from February 18 to 25.

This was our first ‘carnaval’ in Montejaque, and we didn’t know what to expect.

At 12 noon we saw children dressed as Dalmatians, sumo wrestlers, fairies, princesses, Snow White, Superman – and more – wending their way to the beginning of the village. Preceded by the local band, the youngsters walked into the village square, where there was a bouncy castle and lots of supportive parents to amuse and entertain them. The highlight of the band was its drummer, who was dressed as a Scotsman and who had a blow-up doll (wearing a tartan cap and G-string) firmly attached to his back.

By mid-afternoon, the children were virtually outnumbered by the adults who had made the effort to dress in costume: mermaids, matadors and a toro (must have been hot in that bull outfit, as the temperatures in the sunshine reached the mid-twenties), a chicken, a cow, quite a few men in drag … and yours truly, wearing a psychedelic 60’s-inspired trouser suit (flared bottoms and all) with a red feather boa.

After a break in the festivities, the judging began for the best-dressed entrants. Laura Calle Tornay as Cruella de Vil, with her Dalmatian puppies, was a hands-down winner, but there were some excellent competitors and performances on the stage, including an enactment of a chase between two policemen and a ball-and-chain-wearing convict.

After several tubos of cerveza in the town square, I was emboldened to check out if the blow-up-doll-wearing-Scotsman/Spaniard was the genuine article, so I sneaked a peek up the side of his kilt, and was somewhat disappointed to see the edge of a pair of Y-fronts.

At 4:30, it was time for the traditional ‘Juego del Cántaro’, the pitcher- or jug-throwing competition. (Follow the link http://www.youtube.com/watch?v=sDxqNHsdVDg for a video of this game being played in Granada … with more than one jug)!  It was a fascinating – and dangerous-looking – spectacle. The pitcher must weigh several kilos, but the men seemed to have no trouble throwing it one-handed and catching it two-handed. (Despite all the beer I had drunk by this time, I was not brave enough to participate; I think I would have flinched if a flying three-kilo jug came in my direction).

When the carnival festivities were over, the local Hotel Montejaque had hired Marcus Myers, a Cortés-based guitarist and singer, to entertain its patrons. And so the revelry went on … with many of the villagers, still in costume, dancing and singing along to Marcus’s fantastic range of songs: from The Rolling Stones, The Beatles and Simon and Garfunkel to The Eagles, Steve Harley and Cockney Rebel and Bob Dylan.

After such a fantastic day, I believe there is one more song that Marcus should add to his repertoire: Tom Paxton’s “Wasn’t that a Party!” 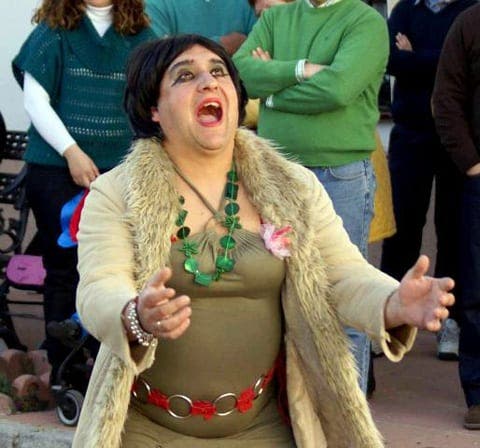 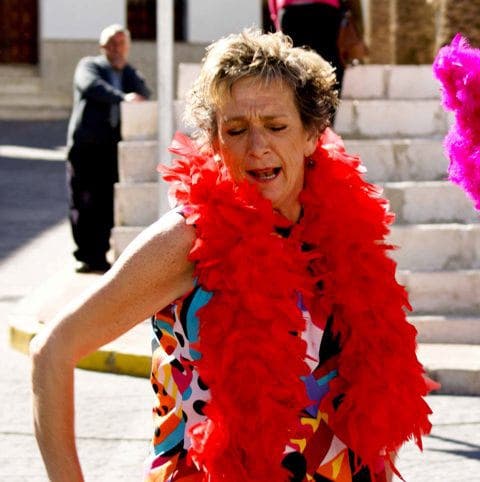