IT is Picasso’s most famous work. And every day some 11,000 people visit the Reina Sofia Museum in Madrid to catch a glimpse of the Spanish Civil War masterpiece Guernica.

But it wasn’t always so revered.

In fact, the last time it visited Britain in 1938 Guernica was handed over to a group of young artists and political activists who nailed it to the wall of a disused car showroom in Manchester.

Now, art lovers in London are being treated to a number of Pablo Picasso’s 67 preparatory sketches that led to his tour de force and reveal the story behind the painting.

“First, the political situation in Britain at the time; the immense support for Spain which explains why the painting became a very special symbol for the peace movement.

“And, second, how the work affected those British artists who saw it at the time.”

Guernica itself will not be exhibited as it is now deemed so precious it no longer leaves its home in Madrid.

But 75 years ago, in a scheme devised by Picasso’s friend the British Surrealist Roland Penrose, the masterpiece was shipped over as part of a campaign to raise funds for the rebels fighting Franco’s troops.

Picasso had created the work while living in Paris after he saw photographs of the devastation left when the German bombs dropped on the Basque city of Guernica in April 1937.

He set about painting ‘a symbolic representation of the horror as seen in my own mind.’

By late June, when Penrose arrived in Paris, Picasso was just adding the finishing touches.

Together they hatched a plan to bring the huge canvas on a tour of the UK – taking in Oxford, Manchester and Leeds – to spread its anti-war message.

“It’s quite extraordinary to think that this is one of the most celebrated artworks of the 20th century and it was simply, in this rather ham-fisted fashion, unrolled and put up like a big poster,” added Little.

Hopefully this time round more care will be taken with his sketches. 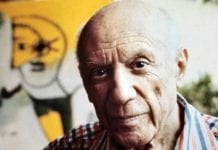 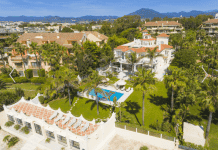