IT is a trait that marks out the Aracena region.

Meticulously crafted with rocks and pebbles from the nearby hills, the quaint  empedrados, or ‘mosaic floors’ are a delight for artists and photographers alike.

Dating back to the 17th century, they are most in evidence in the villages of Galaroza, Valdelarco, Linares de la Sierra and Alajar.

The work combines the efforts of miners, labourers and pavers who quarried white limestone from the nearby hills, then chipped it, filed it and surrounded it with mortar to form paving.

Often built in front of homes, as a kind of threshold, the mosaics marked the transition from public to private space.

They also served as a kind of flat, hard walkway to lead cattle through the house.

Historians believe that in the small village of Jabugo, the paved sections were especially useful for bringing horses and donkeys inside, when they were regularly stolen and smuggled into nearby Portugal.

They also served as a kind of flat, hard walkway to lead cattle through the house.

The best examples of these can be seen in the tiny village of Linares de la Sierra where there are over 300 designs, some dating back to the late 1800s.

Traditionally these llanos – or ‘flats’ – would form a level square of land which was used to place a chair on which villagers would while away the afternoon chatting to neighbours in the Andalucian sun. 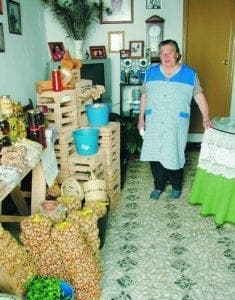