A PEOPLE-trafficking gang has been busted following a joint operation between British and Spanish authorities.

Nine people were arrested in Madrid and Tenerife on suspicion of organising the illegal entry of large numbers of Iranians into the UK.

The gang used a network of safe-houses in mainland Spain and the Canaries, as well as stolen travel documents and credit cards to move the immigrants around.

The multi-national gang were charged with offences including falsification of documentation, credit card fraud and people smuggling.

“The UK Border Agency continues to work in close partnership with the Spanish Police Authorities to tackle illegal migration and the criminal gangs behind it,” said UK Border Agency spokesman Simon Cooper.

“These arrests represent the successful outcome of a multi-agency operation led by the Spanish Police and conducted in close collaboration with the UK Border Agency overseas and in the UK.

“Those who engage in the facilitation of illegal migration should know that they will be targeted and brought to justice,” he added. 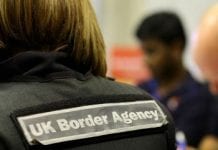 People smuggling crackdown in Spain and the UK