ANTONIO Perez is like a soldier in the fight against the weevil, whose larvae kill palm trees by boring right through their trunks.

The tree surgeon and gardener spends his days applying strong chemicals to palm trees to wipe out insects already present, and to prevent future infestations.

“The beetles attack the heart of the tree,” explained Perez, from Viveros Guadalgarden in Ronda.

“First I have to go up and cut the bottom leaves off with a chainsaw, to expose the part underneath.

“I then use a spade to clear the debris from around the leaf stumps to give easy access to the tree’s heart,” he said.

At this point Perez examines any signs that the palm has been infested by the beetle, whose life cycle is four months long.

While the evidence is often hidden in the trunk, sometimes there are thick holes and at times a vomit-like odour, with brown liquid oozing out of the trunk.

“After that I apply a type of oil which will cause the insecticide to stick to the tree,” he said.

The next stage requires Perez to wear full protective gear to protect him from the toxic chemicals he is applying.

Using 30cc per tree, he sprays on one of three insecticides, depending on whether the tree is already infected or whether the treatment is purely preventative.

“If we used just one, the beetles may build up a resistance,” he explained.

While most infestations can be treated with two treatments – each costing around 40 euros – in extreme cases, several sprays are needed over the course of a year which can cost up to 450 euros per tree.

A SPANISH company has invented a gadget which gets rid of burrowing red palm weevils without using chemicals.

The Ecoring device, created by Valencia company Ecopalm, uses microwaves to treat infected trees with a system that is ‘environmentally friendly and totally harmless both for the plant and for humans’.

Using a giant metal ring attached to a crane and clamped around the tree’s trunk, the Ecoring takes between 20 and 60 minutes to kill all eggs, larvae and beetles.

Already being used by Canals Town Hall in Valencia, this could be a perfect solution for bewildered town halls, which have admitted to having no concrete plans for fighting the seemingly unstoppable weevil.

The nasty beetle has been wreaking havoc on palm trees across Andalucia since it was first detected here in 1995.

The insect’s larvae chomp their way through the palm’s heart for up to a month, eventually killing the tree – a terrifying prospect for a country where palms form such an important part of its aesthetic value. 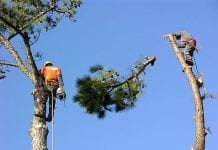 Protest to save San Pedro trees from destruction starts tonight

Hundreds of palm trees destroyed in Almunecar due to killer weevils