THE Southern California Master Chorale will be performing in the Basilica de Nuestra Señora de las Abgustias in Granada on Sunday, 1 July 2012 at 6:45pm as part of their tour of Spain and Portugal.

The repertoire will be sacred and classical. Entrance is free.

The Southern California Master Chorale is a professional ensemble made up of the finest singers artistic director Dr. Sheridan Ball has encountered in his 30 years as a teacher, performer and conductor in the Orange County/Los Angeles region. The chorus was originally founded as the Cypress Community Chorus in 1975 and was rechristened the Cypress Masterworks Chorale in 1981. In that capacity the chorus composed of 75 to 130 singers (depending upon repertoire), has presented some of the world’s finest choral-orchestral music to an ever widening audience. Mozart’s Requiem, Handel’s Messiah, Carmina Burana by Carl Orff, the Bach B minor Mass, Magnificat and Christmas Oratorio, the Brahms Requiem, Poulenc Gloria, Vaughan Williams Dona Nobis Pacem, Beethoven Mass In C and 9th Symphony, Verdi Requiem, Stravinsky Symphony of Psalms, Benjamin Britten War Requiem – the list is extensive and encompasses a vast repertoire from the library of choral-orchestral music.

The Southern California Master Chorale and Cypress Choirs have toured Germany, Austria, Italy, Greece, Israel, England, Scotland, Ireland, Australia, New Zealand, Russia and China. They have appeared at the Orange County Performing Arts Center, the Hollywood Bowl, the Sydney Opera House, Winchester Cathedral and Radio Vienna. They have sung Mass at the Vatican twice and have performed at New York City’s famed Carnegie Hall three times. The Southern California Master Chorale toured China last summer in conjunction with pre-Olympic festivities. Their most recent concert tour was to France, the Netherlands and Copenhagen in the summer of 2010. 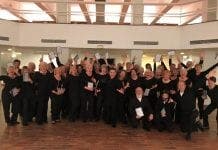 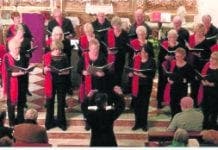 British choir on song in Andalucia