The Pyrenees is transformed for summer. Bears, snakes, ice-cold rivers and bemused locals

THE sun was hot after so many weeks of rain and cloud in Navarra.

The sky had cleared leaving brilliant blue stretching endlessly ahead. The rolling valley of Roncal was cooler, one hour upwards from Pamplona. This valley sees a drastic change each year. Just two months before it is covered in thick snow that disguises any trace of summer in the Pyrenees. There is only the odd dark twig that pokes its head above the carpet of white. You can see the roofs of small dark shepherd’s dwellings and paw prints are the only indication of wildlife. Much like a sped-up wildlife programme, fast-forward is pressed and the motions of the seasons flow rapidly. The Pyrenees is transformed; flowers sprouting, leaves blossom the trees with that unique sun-induced green, luminescent against the dark evergreen hue that’s there all year round.

As we walked over and through the foliage, wildlife peaked out everywhere. Bears once roamed this area in large numbers and a conservation project has tried to reintroduce the native brown bear species but without much success. The local shepherds found it difficult to manage a natural predator to their livelihood. The government set up a compensation programme to cover for any loss of stock and many efforts were made to preserve the bears’ natural habitat. However, the bears didn’t seem to thrive in the valley. Camille, the last lonely Navarran bear, disappeared last year.

No bears, but we did come across a snake, well actually, it came across us. I’ve never seen one move before. We often use slither to describe the movement of snakes. This snake slithered across our path – the dry rocky path – but slither is the wrong word. Slither evokes visions of slime, clinging to the ground, passing over obstacles with the body following the shapes underneath it. This snake moved like there was nothing beneath its belly, no thorns, jagged dry rocks or hot crumbly earth, almost as if levitating off the ground, its head high and its muscles moving in an S-shape. It moved across our path with no fear, no trepidation when faced with human feet. He audaciously stopped the human traffic on his journey across the forest floor. It was grey with dark brown diamonds on its back, only a baby, but with the courage of a viper! 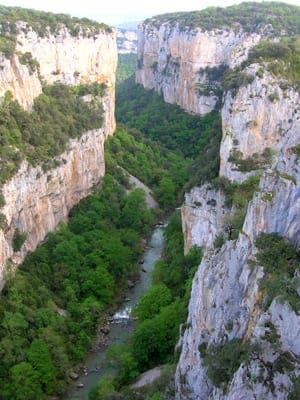 Despite the arrival of summer, glacial water flows deep and strong through the Roncal valley. From high up in the mountain where the peaks are still glistening with majestic white snow, we splashed our red faces with the cool luxurious water. The villagers of Roncal looked on in amused horror as we walked out into the icy water. The water flowed strongly over well-worn rocks, slippery and smooth from millions of years of rushing mountain minerals. Eventually we succumbed to the current and swam against it like on a treadmill or relaxed and floated like leaves on the surface. We dried off on the patio before moving onto the next gathering of grey-slate roofs, the village of Isaba.

In Isaba there is a footpath that heads uphill through dense forest. The path is cobbled and covered in moss. It is a pilgrimage, dotted with crosses, which leads to the old village chapel. The chapel has small medieval windows, a wild-looking garden with pots of flowers and fruit trees and a spring-water tap for weary travellers. Heading out through the back gate, a crooked sign holds the message “el puente esta roto” “the bridge is broken”, but we took it anyway.

After walking through the forest and down a very steep verge we reached a section of the river that was particularly raging. The icy water splashed over rocks forming whirlpools. Unwilling to turn back, as this would mean scaling the verge again, we decided take off our shoes, tie the laces the together, hang them around our necks and brave the ferocious water. After a few struggles, a near miss with the guy holding a camera, and an ingenious production line which meant the electrical items and shoes arrived safely to the other bank, we made it. The other bank was completely covered in wily stinging nettles, clearly this bridge has been broken for a long time, but we cleared the verge and arrived directly onto the main road that lead back to Isaba. Our muscles and adrenaline having worn out, our skin stinging and our clothes wet, we slumped into a taberna where the bemused staff served us icecream and copious amounts of water.

On the way back to Pamplona, we stopped off at the impressive Foz de Arbuyan. It is a deep canyon carved by the Salazar and Irati rivers. It is a wonderful bird sanctuary. A knowledgeable bird watcher pointed out red kites, buzzards, an eagles and vultures. Whilst observing the soaring birds and with a strong evening breeze, our bodies recovered before heading back for a good night’s … pintxo-ing.