FOR lovers of water sports, Andalucia represents something of a mecca for both professionals and beginners alike.

The fantastic weather and excellent purpose-built facilities make for an ideal environment in which to learn the ropes, or perfect your skills.

Arguably the jewel in the crown for fans of waterskiing and wakeboarding is Xtreme Gene, an unassuming facility tucked away at the end of a dirt track, 15 minutes away from Cordoba.

Perched on the edge of Embalse de la Brena reservoir, near Almodovar del Rio, the majority of instructors at Xtreme Gene are current champions for their respective countries and the little-known spot is one of Europe’s top destinations for watersports teams.

But although it is ideal for the pros, it is also a fantastic place to bring the kids, who can learn how to ski, as well as canoe, fish and swim.

Set up in 2002 by owners Debbie and Matt Southom and former Spanish champion Andreas Alijo, it offers a relaxed, inclusive environment for water sports enthusiasts of all abilities.

Professional waterskier Matt has represented England, while Debbie spent years working in marketing for Ministry of Sound nightclub in London.

Several of the instructors divide their time between teaching and competing at the key international championships.

“We often get total beginners, as well as stag weekends, so they have to be patient,” says Matt, who was once ranked fourth in the world.

The high-calibre of instructors means that those trying the sport for the first time are in the unusual, but hugely beneficial, position of being taught by the best in the business.

But Xtreme Gene is by no means the only option for those looking to try their hand at waterskiing and wakeboarding.

Cableski Marbella, based in San Pedro de Alcantara, offers the whole family a great day out in the heart of the Costa del Sol.

The sport differs from the traditional method of using a boat to pull skiers around the lake, instead using an ingenious cable system similar to the button lifts used by snow skiers.

The facility is proving popular with tourists and expats alike, with tuition available for children on kneeboards, waterskis and wakeboards.

It is regularly used by five time Spanish champion and former world number 10, Jamie Oliver (not that one!), with the 27-year-old lending a hand with the tuition.

All equipment is available for hire next door from the Surfin’ shop, while there is also a restaurant and pool available for those looking to pass the time in a more relaxed manner. 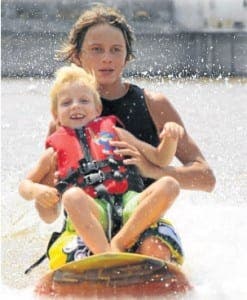 “We have people of all ages and abilities coming down here to use the facility, from 10-year-old kids trying it for the first time, right through to professionals who have been doing it for 20 years,” says Gaston Marinoni, at Surfin’.

“Cable ski is growing as a sport, especially in the last five years because it is cheaper than using a boat.

“We will be introducing ramps onto the lake in a couple of weeks to attract more pros and we’re looking to start putting on BBQs and parties in the evenings to create more of a social environment,” adds the 39-year-old Argentinean, who also runs the famous same name snowboard shop in the Sierra Nevada.

All in all, there really is no excuse not to get wet in Andalucia.