BRITISH tabloid The Sun has faced a backlash after labelling Spain’s most famous resort ‘Benidoom’.

Holidaymakers set up a Facebook campaign demanding an apology after the newspaper claimed Benidorm was in a ‘pit of depression and despair’.

One campaigner called the article ‘blatant lies’ by a writer ‘who did not do his homework’.

In particular the town is angry that they used photos of two totally different beaches for a ‘then and now’ pull-out box. 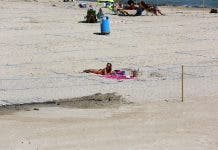