EVER since I first set foot on the slopes a couple of decades ago, I’ve always been keen to bundle myself up in as much cosy ski gear as possible.

So when the Olive Press sent me up to the Sierra Nevadas with little more than a bikini and a pair of ski socks it’s fair to say I was more than a little apprehensive. But never one to turn down a ski trip, there I was at 5.30am skimpy swimsuit in hand heading up to the mountains.

We’ve all heard the old adage of ski in the morning, sunbathe in the afternoon, and the Sierra Nevadas are one of the only places in the world where this is do-able. But this weekend I was challenged to take the whole concept one step further. I was going to attempt to ski in the morning and then make it over to Puerto Banus in time to live it up at the Ocean Club’s famous champagne spray party. But the catch was, I was to spend the whole day wearing just a bikini.

Fair enough – it is the start of May, the sun is shining in the mountains, and a bikini is the standard attire for the Ocean Club. But swimsuits in the snow? Really? 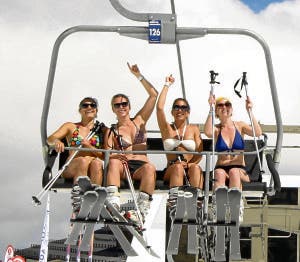 Standing at the bottom of the ski lift I’m not feeling terribly confident. I’ve been assured that plenty of people will be in their swim gear for the final weekend of the season but all I can see are skiers all snug and warm in their jackets and salopettes giving me rather strange looks.

However, once up on the hill everything changes. The atmosphere is riotous, with skiers charging around not only in bikinis, but swim shorts, armbands and rubber rings – and there’s even a surf board thrown in for good measure. And – although it’s a little chilly on the chair lift – with no wind and plenty of sunshine I’m almost glad to be rid of cumbersome ski gear.

In fact, it takes only seconds for fears of painful wipeouts and potential frostbite to evaporate and I’m off tearing down some of Europe’s highest and most beautiful mountains. I’ve always believed skiing is the best natural high possible, but in a bikini it’s just that little bit better – the feel of sun and mountain air on skin is incredible, the adrenaline is pumping and there’s great potential for an even tan. 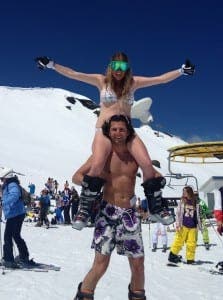 Admittedly, there are a couple of bloodied knees coming off the slopes and I can see that swimwear may not be the most practical attire for a sport where hitting the deck is cold, hard and painful (snowboarders take note!). But it doesn’t take long for me to decide springtime skiing is definitely better minus the skiwear.

I’m pretty shattered after a few hours on the slopes (and more than a little sunburned) but at 3pm it’s back in the car for the two hour drive to Marbella. I’m not too worried at this point. After all the hard part’s over and all I have to do now is sip champagne by the pool at one of Spain’s most fashionable clubs. No problem.

However, as I stride through the door past a couple of 6ft models in heels and full make up and am met by a bunch of ripped lads spraying veuve clinquot and pumping their fists, I’m beginning to think this might not be so easy. And I’m suddenly very aware of my ragged hair, odd-looking goggle marks and smudged make up – hardly the standard look for Marbella’s hottest opening party. 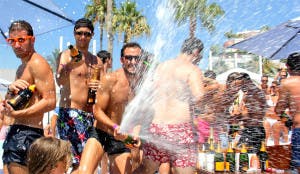 But this isn’t the time to let the side down, so mojito in hand I head towards the ‘beds’ which surround the pool. As anyone who’s been at a champagne spray will know, it’s something you won’t forget in a while. If you can handle the eye-watering prices, TOWIE wannabes and the rather staggering waste of champagne, then you’re sure to have a great time. And despite my achy muscles and stinging sunburn, I find that I’m actually getting into the spirit of it all. However, when the girls start falling off their designer wedges and the stag parties begin to disband, I decide it’s time to call it a day and finally retreat to the comfort of a T-shirt.

So it seems that sun, snow and spray can indeed be done in a day. Is it practical? Hardly. Will it catch on? Probably not. Affordable? Not at all. But would I recommend it?