LAST month I included Nerja in my list of six of the best Andalucían beaches. I’d been just once before, in June 2011, though that had only been a fleeting visit. Needless to say, I was still mightily impressed with what I saw, and vowed to return as soon as possible.

Sadly, I wasn’t able to fulfill that vow until last week, and now I am truly enamoured with the place.

There are a total of seven beaches in Nerja – eight if you count Maro, the tiny township a further 3km east. All of them are stunning, from the secluded yet spacious El Playazo, 15 minutes’ walk to the west of the famed Balcón de Europa, to the far end of the blue flag awarded Playa Burriana, 15 minutes the other way. The waters are, as you might well predict, verging on completely see-through. From the lookout on the Balcón (balcony) – Nerja’s sparkling central point – one can even spot the fish hovering in the undisturbed rock pools around 60ft below.

Playa Calahonda is the beach immediately east of the Balcón and thus draws the biggest crowds. It is here where our first afternoon in town abruptly slumps to a standstill; it’s nothing but sandy siestas and periodic plunges for three straight hours. At one point I muster the energy to go and buy an ice-cream, but even that feels like a chore. 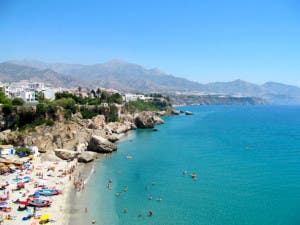 When we do finally ascend the winding steps back into town, there is a loud ensemble of glamourous dancers and ship-shape brass bands trumpeting their way through the town’s main thoroughfare. ‘What’s going on?’ I ask E. ‘You didn’t know?’ she replies in Spanish. ‘Today’s the first day of the Virgen del Carmen festival’.

Good Lord. Another festival, and, as it transpires, it’s a rather important one too. Virgen del Carmen is a celebration of the patron saint of fishermen, and has been going since the 13th century, though there’s only so much brass band and processioning I can take; the novelty of it all soon wears off after two years in Granada.

Our hotel, Hotel Carabeo 34, is one of TripAdvisor’s most recommended. Glowing guest reviews and convincing photos made decision-making an incredibly easy process. On our arrival, we quickly discover that we had chosen well; the staff are all smiles and the room is immaculate, from our perfectly plumped pillows on our massive king-size bed, to the sweeping sea views seen from our own private terrace. It’s a genuine struggle to remove ourselves from beneath the cooling ceiling fan in order to explore a bit more of the town centre. 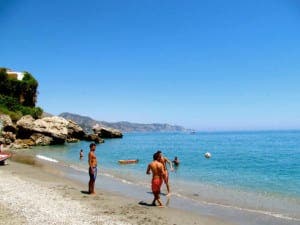 Calle Pintada, beginning near the bus stop and leading down toward the central plaza, is the main tourist strip. Along here one can find just about anything to meet their holiday needs, and despite the bustle there’s a much less seedier feel to it than one generally comes to expect in tourist havens such as this. Just five minutes down the road – aside from Playa Burriana – white-washed houses, sleepy cafés and friendly frutarías flank the empty streets. It’s as quaint as any other Spanish pueblo I’ve ever seen.

That evening, we dine at Carabeo’s terrace restaurant, where both the food and service are outstanding. Its rashers of jamón iberico served with pan con tomate for starters and fillets of fresh sea bream for mains. Both are exquisite, and yield prolonged phases of positive head-nodding as we gorge ourselves silly.

Meanwhile, the festival celebrations over on the Balcón de Europa are providing us with excellent dinner entertainment. We can see clearly the huge fiesta unfolding beside a specially erected stage and where, no doubt, scores of sardines are being greedily consumed. And as darkness creeps in, a small fleet of fishermens’ boats – one with the revered image of Virgen del Carmen onboard – chug their way past us in honour of the centuries-old tradition. When they complete their lap, the first firework of a brilliant spectacle zooms upward and lights up the sky. We picked the right time to come it seems. 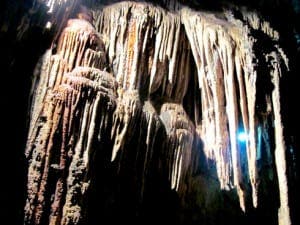 Next day, we head for Maro, home to las cuevas de Nerja – the Nerja caves. These astounding caverns were only discovered fifty years ago, after a couple of local lads happened upon them while out climbing, or so the story goes. Now droves of tourists flock here on a daily basis, yet when we arrive the queue consists of just eight people. Annoyingly, we neglect to invest in an audio guide before beginning our tour, which, as a result, finishes rather quickly without the added info. Still, the stalagmites – the world’s largest among them – are sights to behold, and prompt us to develop a couple of our own theories, flawed and childish as they might be.

Beyond the caves the rest of Maro tumbles toward the coastline and provides the perfect setting for a midday stroll. After a quick lunch we amble our way down to another beach paradise. ‘Here will do’ says E, throwing her towel and beach bag to a patch of isolated sand. ‘Sure’ I mumble back, vaguely aware of two bodies shuffling about behind us. And with one swift maneuver the bra and baggy beach dress are whipped off (not mine), prompting said bodies, who happen to be a couple of British kids, no older than twelve, to gawp like stranded fish. It’s a lot quieter, and when E’s audience finally withdraw, we settle in to another lazy afternoon.

That night we are somehow able to resist another sitting at Hotel Carabeo and plump for a simple pizzeria round the corner. It’s good but distinctly lacking in comparison. The festival, while perhaps not quite as dramatic as the night before, is still going strong. We join in the fun for an hour or so but before long bed is calling.

It’s a shame we have to leave the next morning; festival or no festival, two nights in Nerja just isn’t enough.