IF there’s one festive tradition I’ve kept since moving to Spain, it is Cadiz’s Carnaval.

Given that this year marked my hat-trick, I’d like to think that I now have a good case for assuming expertise on the discernibly anarchic event. Those of you that have been before know the drill. Those of you who haven’t will either have:

To the former, I understand your disaffection – it is no doubt to a certain extent justified and the likely reasons for it will be addressed. To the latter two clutches, please lend me your ear as I guide you through the crammed and cluttered alleyways of Cadiz while giving you a thorough and honest step-by-step compendium of the manic street-thrash that is Carnaval. 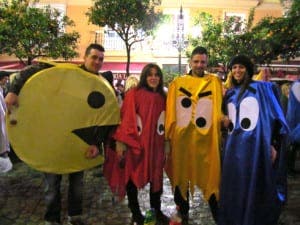 The principle is simple. Turn up in a daft-looking costume and join the colourfully clad masses to form one giant, stumbling, booze-guzzling party monster that permeates Cadiz’s streets for an entire weekend.

The effects are simple too. Drinking from noon onwards in the company of hundreds of thousands of other similarly cracked and self-intoxicating socialites results in very blurry vision and widespread disorientation on an extraordinary level. It is sheer anarchy, on a colossal scale.

But what makes Cadiz Carnaval so fantastically different from any other fancy-dress blowout is its distinctly fertile imagination; costumes will often relate to trending and controversial news topics without even so much as a whiff of self-acknowledged ignominy. Though the event is best known for its chirigotas – satirical groups of performers who dress identically and serenade other revelers with witty refrains about politics, current affairs and everyday life. Each chirigota – whether made up of professionals, family members or friends – has a wide repertoire of songs and typically station themselves on steps or high walls where everyone can watch. Even if you don’t understand Spanish it’s not hard to tell that they’ve been practicing for weeks. It’s a pretty big deal.

What not to wear

The obvious answer here would of course be ‘normal clothes’. Though there’s a lot more to it than that. Skimpy t-shirts/shorts/vests/ generally anything that shows a bit too much skin is a massive no-no. As a rookie, you’d be forgiven for turning up dressed in your used-once-only-at-Uni Baywatch costume – we are in Spain after all – but Cadiz is an island, and during the winter is pummeled by winds from both the Atlantic and Mediterranean. In other words it’s bloody freezing. Lose the Speedos and take the Top Gear jumpsuit instead.

Now earlier I alluded to there potentially being several downsides to Carnaval. Well there are, although in my respectful opinion these are far outweighed by the upsides. A major one of these downsides, however, is the matter of going for a piss. Naturally, it is less of an issue for boys than girls, owing to the relative ease with which we can find a deserted and already piss-strewn doorway. Not that I’m condoning the act – there is just simply no alternative. Girls face a much more problematic task, though I tend not to ask where and how. At any rate, by the early hours the streets are absolutely inundated with pure liquid gold, so do not wear shitty €3 pumps bought from a chino if you’d like your feet to remain dry and pee-free – a sturdy set of trainers/boots are the way to go.

If you should decide to take a bag, or have been involuntarily appointed inebriant-keeper for the day/night, you will no doubt be wondering how to keep weight down. First off, pack extra alcohol. Decanting spirits from glass bottles into plastic ones and then mixing with coke will significantly reduce the load by a few kgs. Also take plastic cups and don’t forget those emergency beers either. Now that the important part’s taken care of, cram a hoody (and an extra pair of socks if you actually did buy some shitty €3 chino pumps) and plenty of munchies in there and you’re all set.

Who not to go with

How not to get lost

Forget phones. If the signal isn’t jammed then actually managing to meet someone somewhere via your mobile when lost is futile – nobody knows where the hell anything is when there’s that many people about. If truth be told, keeping all your troops in tow for the event’s entirety is a rare feat. This year, my band of merrymakers and I began as a mere threesome and thankfully ended as one, though we had for several hours in between been part of a much larger brigade. Of the hazy memories of my first year, I can recall wandering alone for what I thought had been about fifteen minutes. Next day my friend told me I had been lost for almost three hours. So this year’s result was definitely a favourable one.

Getting lost or losing friends is essentially an inevitability that one must face prior to Carnaval, unless, as I have now learnt, you decide to create a group theme so original that it would be impossible to lose each other. Take these happy carousers for example: 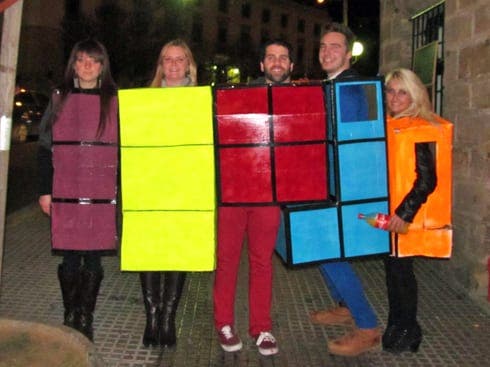 And I think that just about covers it. I suppose my final word of advice would be to just make sure that if you’re going to do Carnaval then do it properly, and accept it for what it is. There’s nothing refined or pretentious about Carnaval – it is a no holds barred, debauched and raucous piss-up which in its latter stages is unreservedly disgusting. But it is one of the most epic fancy dress parties on the planet. And that’s surely worth investigating isn’t it?