Judges ruled they were competent to handle the case because one of the activists is a Spanish citizen.

The Madrid-based Tibetan Support Committee allege that as a communist leader in the region he was ultimately responsible for the actions.

The Spanish legal system recognises the universal justice principle, under which genocide suspects can be put on trial outside their home country.

For Spain to hold the trial there is a requirement at least one victim of alleged genocide must be a Spanish citizen. 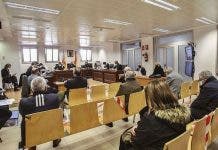