A PAIR of actors have made a poignant return to the set of the BBC’s most famous flop.

The duo – who starred in Eldorado, a soap opera based on the life of expats in Spain – have lent support to an online petition to bring the show back.

The pair, Franco Rey and Polly Perkins teamed up with producer Andrew Mark Sewell for the visit to the now empty set in the hills above Coin. Sewell was behind the revival of another cult television classic, Blake’s 7.

Perkins, who has just appeared in Eastenders as Dot Cotton’s sister Rose, said: “People are still talking about Eldorado even after all these years. The tourists loved it, they felt connected with us and used to visit our locations.”

The early days of Eldorado, however, were notorious for behind-the-scenes problems. It was beset with problems of wobbly sets and even more wobbly acting: Rey was actually an optician from Golders Green and later worked as an investigator for disgraced newspaper News of the World.

The problems would eventually lead to co-creator, producer Julia Smith – who had also co-created Eastenders – having a nervous breakdown.

Despite everything viewing figures began to improve, but in 1993 new BBC1 Controller Alan Yentob sensationally axed the programme, even though it was attracting over nine million viewers.

Over 20 years later, an internet campaign to revive the soap has gathered thousands of signatures, and Yentob has remarked “The campaign is more famous than the show itself!”

As Perkins, who played Trish Valentine added: “A return would be great and it could be more sophisticated, less gloomy than most British soaps, aspirational and certainly more glamourous.

“It could offer a good contrast between the ordinary folk who live on the urbanisations and the glamourous folk in their Marbella palaces.”

There were rumours another expat-centred soap was about to launch… find out more here. 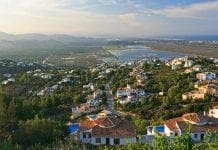 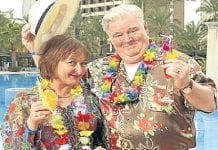