A BRITISH man claims he has been ripped off to the tune of thousands by a dodgy car transportation company he used to repatriate his vehicle.

But after a series of disasters, including the arrest of the transportation truck driver, and the loss of both his car and its key, he didn’t see his car again for six months.

Pensioner Mullender, who recently moved back to the UK from Fuengirola, said: “After the driver was arrested on the advice of Eurocar Transporters boss Peter Green I employed a second company, Transco, to complete the shipping.

“I agreed, before being told my car had gone missing. When it was eventually tracked down by the police a few weeks later I was told the arrested truck driver had lost my key.

“Once I had sourced a replacement I thought my troubles would be over, but that wasn´t the end of it and I still didn´t get my car back.

“A month or so later I found out it was being held at the port in Felixstowe, along with six other vehicles, because Green had not paid the second driver, and so the could be taken no further without the payment.”

Eventually, he ended up having to shell out another €800 to a third firm to bring the vehicle back.

When Mullender took up the matter with Green, things turned nasty.
“I had numerous conversations with Green, and on every occasion he tried to exonerate himself of responsibility for the payment.

“I had tried to contact Green via email, but in his replies he became threatening, saying things like ´I know where you live´

“It is disgrace. I didn’t know where my car was for six months.

Eurocar Transporters has since been wound up, and Green himself is now going by the name Ian Burg.

He runs another company, Car Transportation, which he claims bought out Eurocar Transporters.

When the Olive Press contacted Burg, he said the issues with Mullender´s car had arisen because the car had been too full to move onto the lorry that was dispatched following the arrest of the original driver.

He said: “We were unable to move the car because it had too much stuff in it. It had been loaded onto the original truck by a pulley, but the second truck didn´t have one.”

When questioned about his change of name, he said: “My name is Peter Ian Greenburg.” 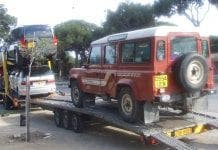 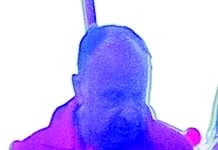