PROTESTORS have gathered in the northern Spanish city of Burgos amid spreading unrest over costly plans to redevelop a street at a time of cuts.

The project to replace Calle Vitoria with a boulevard at a reported cost of €8m has sparked riots in Burgos and the capital Madrid.

Demonstrators argue the money should be spent on social services instead.

The mayor has suspended the work but argues the project would improve the quality of life for citizens.

A bike lane and green spaces would be added under the plan for Calle Vitoria, one of the city’s main thoroughfares, in the Gamonal district.

However, the current four lanes of traffic would be reduced to two and free parking spaces would be replaced with a paid underground car park.

Protests have continued for a week, with rioting in Burgos last weekend and clashes between demonstrators and police in Madrid in recent days.

Burgos, the historic capital of the Castile region and famous for its monument to Spain’s national hero El Cid, has debt of €500m, Reuters says. 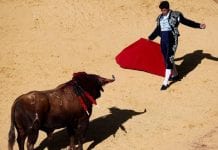 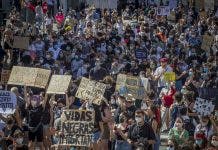