SPAIN’S environmentalists have raised concern after a veterinary drug that wiped out wildlife in Asia has been brought to market in Spain.

The manufacture and use of diclofenac, a drug used to treat sick cattle, was approved in Spain last year, despite it being knowingly responsible for reducing the vulture population in India by almost three quarters.

Researchers from the Peregrine Fund established that vultures could ingest lethal amounts of diclofenac in one single feed on the carcass of an animal that had been treated with the drug.

They concluded that the extreme sensitivity meant that vulture populations can be wiped out even if less than 1% of carcasses available to them are contaminated with the drug.

Spain is Europe’s vulture stronghold and home to up to 90% of all four species found on the continent, including 85% of the remaining Egyptian vultures which are classified as endangered worldwide.

The approval went through without government agents or the drug’s manufacturers speaking to wildlife experts.

“Risk assessments were done,but these do not mention vultures at all, and the competent authorities did not send these risk assessments to any conservation NGO for checking.” said José Tavares of the Zurich-based Vulture Conservation Foundation.

Experts suggest that even if used sparingly, it is almost inevitable that significant numbers of vultures will feed on drug-laced carcasses in Spain.

A coalition of organisations including the Vulture Conservation Foundation, the Royal Society for the Protection of Birds and BirdLife Europe are urgently pushing for an EU-imposed, continent-wide ban on veterinary diclofenac.

“Decades and millions of Euros have been spent protecting Europe’s vultures,” says the coalition, “we should now not let all of them disappear.” 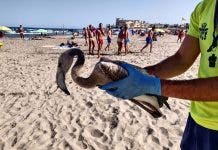 Alex Trelinski - 26 Sep, 2020 @ 11:15
ORIHUELA is to stage two months of commemorations in honour of one of the area's most famous figures, the poet Miguel Hernandez.