DISTURBING reports of a performing bear at a medieval market in Los Alcazares, in Murcia, have emerged.

David Meanwell, from Bear Conservation UK, contacted the Olive Press with the news.

One of the society’s supporters living in the Murcia area, was shocked to see a captive bear being led through the market.

She appealed to Facebook for more information and unearthed this picture.

This appears to be the first case of a performing bear since the Olive Press reported on two incidences in 2007.

A dancing European Brown Bear was spotted touring with a medieval market near Sevilla while three Siberian Bears were found to be performing at a Granada circus, provoking heated debate on the topic. 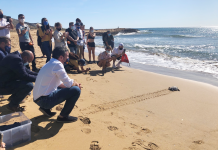 Charlie Smith - 1 Oct, 2020 @ 16:06
IBERDROLA´S chairman, Ignacio Sanchez Galan, has announced that the energy company will increase its renewable facilities in Andalucia to 3,000 megawatts over...