STRETCHING along the coast eastwards towards San Pedro is one of the most popular places for expatriate British to live on the whole Costa del Sol.

But, while it is heavily populated by foreigners, the coastal zone of Benavista is completely different to the sprawling coastline east of Marbella.

Far less developed and lower rise, it is also considerably more family orientated and best of all has some great beaches.

And then there are the golf courses, which line the nearby hills.

“We are so spoilt for choice,” says Hughie Holgate, 63, who runs the Benavista bowls club and next door restaurant Los Arcos.

“There are at least half a dozen golf courses within a mile of here and the facilities for families is great.

“On top of that you are only a short drive from the hills via the Ubrique or San Pedro roads.”

The entrepreneur, a father-of-four, added that the bowls club was a real magnet for the area.

“We have many members, who play in leagues up and down the Costa del Sol,” he explains. “And non members have their own green.”

Down from here you find a string of urbanisations – Diana Park, Benavista and El Pilar – which are full of local shops and services.

They include a range of excellent butchers and cake shops, as well as English supermarkets, curry houses and British bars.

“There is pretty much everything you could need around here,” says Pauline Kavenagh, who runs the Grumbles restaurant, which has been open since the late 1980s.

And Peter Williams, owner of Golf City, adds: “The area is not too over-populated and there is lots of open space to enjoy.” 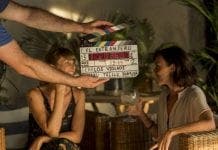 FOREIGNER: The Spanish film about a British tourist, an expat and a boat full of illegal migrants, is up for a Goya award